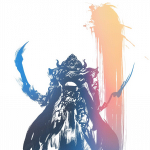 You can call me Gest. I'm a dude from Mexico, hardcore fan of Final Fantasy series. There's not much I can share with you about me, let's take my Top 10 Final Fantasy games!

10.- Final Fantasy III Final Fantasy III is a very simple game. It lacks of story or character, except for the main antagonist, Cloud of Darkness. It's pretty fun however, and I'm not talking about the remake for DS/PSP, but the original game never released in America for NES. I had the opportunity of playing it translated, as it was one of the few fan-subbed games of that time in the NES. Released original for Famicom, Final Fantasy III was more like Final Fantasy I, getting ready for taking the big step to Final Fantasy IV.

Final Fantasy is not the best game you could play. However, is a very fun game. And yet, the story is great, but the key thing in V, is the art by Amano. It makes you imagine how amazing the could look at 3D, but without the need of it. Final Fantasy V was a great game, saving the Void from Exdeath is not something we could see everyday. The characters interactions were majestic, with Bartz serving as guide for the rest of his companions, in the war where the Crystals are the important thing. Final Fantasy V will be a memory of a nice game. The music is amazing, and still has classics like "Clash of the Big Bridge" and the battles were fun. One memorable game, very ignored by the fans, but still very enjoyable.

Final Fantasy was the progenitor of, not only the rest of games in the series, but of the entire RPG genre. Who didn't played the Chaos Shrine during the golden years of NES? Final Fantasy I is still a masterpiece, maybe not as a Final Fantasy game, but as a RPG, it has no match.

Not much is said about Final Fantasy VIII. However, at least for me, is great. The tragedy of military high school guys is great, for more weird this sounds. But the weirdness of VIII was the thing it made it unique. Do you remember how did Rinoa meet Squall? Or what about the teacher Quistis? And not to forget the great Seifer, and Zell. Or Selphie. All these characters are memorable, one way or another, every fan should know them. And more, because VIII, is the next step Final Fantasy took after the amazing Final Fantasy VII. The music of VIII is majestic, and it has one of the best songs, if not the best, of the entire Final Fantasy discography: Liberi Fatali. What a song, it makes you cry. It remembers me, the greatness of the battles and characters. However VIII's complaint was the lack of MP's and the troubles and confusions I got by working on the Junction system, which sucked all the way. After these problems, the game was great, and it is a very unique love story.

No other NES classic is bigger than Final Fantasy II. It is one of the first RPG and games in general to have a told story and characters, as well as interactive non-player characters. It has the most terrific antagonist of the entire series, the only one I would never dare to confront, Emperor Mateus. We could see him in the modern II's releases as an effeminate guy, but do not underestimate him. The dude is a completely badass. And his final form during the last battle is something you would not like to see in real life. Returning to the game, the gameplay lacked of EXP points. But this was not bad actually, it helped to distinguish I of II. Not to mention it has the staples of Final Fantasy games, moogles, chocobos, gils. And it has a great interaction between the few playable characters, Leon, Maria and Firion. This last one, our hero, is an amazing guy, despite of not talking much in the game, by being very basic, is extremely an amazing character. And II, is such an amazing videogame.

XII experience was very deep. From what I knew at the time XII, was like the Star Wars of Final Fantasy. Adventures by Chocobos, laser bullets, space ships. These things exploded the series name to the maximum! XII is a real amazing experience, and for the story is very unique. Who may thought Ashe was a Queen? Something unexpected. Who may thought a thief could be a warrior of Dalmsca? And Vaan, alongside Balthier and company showed us to not fear, even to the Judges like Gabranth. However, the music was a constant complaint for me. I have heard many thing better than XII's soundtrack. Despite of this, XII stands as the best 3D Final Fantasy game to date, and the best and only amazing game in the Square Enix's Final Fantasy catalogue. The gameplay was very smart, but for me not that appealing as other more traditional ATB systems. Epic Story and unique characters.

The best well known Final Fantasy game. Known by its epic moments, memorable characters. From the Slums to Aerith's death. From the escape of Midgar to the battle in the Core. And, in the end, one of the best experiences I've ever had playing a videogame. I was very satisfied when I reached the end of the game. The tears fell, not for less, I finished one the best games of all time. Not to mention the music, the part I enjoyed more, and I still enjoy it today. From "Anxious Heart" to the rocker "Those who Fight Further". From the epic "Aerith's Theme" to the brutal "One Winged Angel". Final Fantasy VII was unique, the first game without setting on a medieval era, instead, a unique atmosphere with cyber-punk elements was granted, for good. Final Fantasy VII will always remain as one of the best games in the series.

Did you expect less? Final Fantasy IV is the first enormous Final Fantasy game. The first game with extraordinary characters and a story that will freeze you. As well as the first with the staple blue screen. If there is a word to describe IV, I'd say "Beautiful". The story is so gorgeous that will make you cry. No, really, it will make you cry. Cecil and Kain's adventure is narrated of a form, that any human being would dare to doubt about their feeling. Used and betrayed by their own Kingdom, they joined a group of friends to fight for freedom, in search for the remaining Crystals, in a world where the name of the series is finally applied. It is a Final Fantasy, epic travel to the moons by flying ships and battles with strong bosses and enemies while listening one of the most beautiful soundtracks in the world. In terms of gameplay, it introduced the ATB battle system on the series, that would later become the standard for Final Fantasy videogames. It has been an amazing game, so amazing that any other game could have what IV has. Except the number one.

In this right moment writing this, I'm crying. Final Fantasy VI is not only a videogame for me. Is a life experience. It has everything. Memorable characters, the one with more than any other game in the series, a total of 16 playable characters (including the ones you only play once). It has music. Majestic, epic. The best soundtrack for a videogame I've ever listened. It has the best piece of music ever recorded, not only about videogames music, but as every kind of music, "Terra's Theme". Sublime... I have no words to describe VI. Is the best videogame I have ever played. And, for me the key, is the main character: Terra Branford. She is the best thing that could happen to Final Fantasy. It has the best villain in the series, the mad clown Kefka. Who, in fact, is the Emperor's right arm. Final Fantasy VI is the ultimate experience as a videogame, not only as a series' game. It describes you the beautiful the life could be, but you'll have to know how to live it. Never surrender, even if the chances are minimal. I have one word to describe VI: Perfect. And, by far is the Ultimate videogame of all time.

Retrieved from "https://finalfantasy.fandom.com/wiki/User:GestahlianChocobot?oldid=1685421"
Community content is available under CC-BY-SA unless otherwise noted.