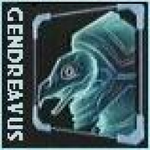 I think a pencil is lodged in my brain. Can I go to the nurse?
―Dib, Invader Zim

'Sup guys? I thought I'd give a bit of a backstory to myself here, so lets get to it! For a long time before I ever started playing Final Fantasy I only knew it as the series that just kept going. I would make mock bets with friends on when Final Fantasy XXIII would come out, stuff like that. My first real experience in Final Fantasy was in a computer surplus store when I was 15 where the Koreans who ran the place were playing a subbed version of FFVII:AC on a TV in the store. It was at the very beginning, and while watching it, all I could say was "Shiiiinnyy..." I tore myself away from the movie though, because I'm a storyline freak and refused to let myself watch a sequel before experiencing the original. After about two months of badgering, a friend finally let me borrow his PSX and FFVII. I played it obsessively and loved it, then watched the movie and loved that as well, despite the fact that after seeing it about seven times parts of the story still elude me.

The next Christmas my parents got me FFIII for the DS. I played it. It was alright. Not much else to say on the subject.

From there, a friend of mine let me borrow FFVIII, which I wasn't really too fond of while playing, but now that I think back on the actual story and events in the game, I wish I still had it. Although it was definitely not your typical fare for a fantasy RPG, seeing as the villain is quite possibly the worst developed villain since Wart, half of the cast exists only to piss you off, and they reuse the cheesy "SURPRISE! We're all orphans!" device from FFIII, I still remember it fondly.

Then I went and got my act together. Putting aside all of my loathing for Sony, I went and bought a used PS2 (my excuse was that since it's used, Sony doesn't get any of my hard earned $$). I played and beat XII. It was fun for a while, until I realized that the battles consisted of me being near an enemy and holding still.

Then I played and beat X, which was fairly interesting. Walking into it I immediately said "I'm gonna hate that Wakka guy. He'll just be an obnoxious twit. Oh, and Khimari's a furry. He'll have to go. Lulu looks like a slut...although Rikku isn't much better with those Daisy Dukes..." Despite all this, FFX somehow got me to actually like all of the characters. Sure the voice acting sucked for the most part and Seymour was a whiny little prat whose motives made little to no sense (and no, I'm not asking for a lecture on how they actually do. If I was really all that intrigued I'd obsess over his page), but the game had some amazing features to it (like Auron in general) that made it interesting all the same.

And then there was the quest to get Tidus's sigil. All I need to say is that it's a wonder I wasn't bald from pulling all of my hair out before I gave up on that.

After X, I beat both PS2 Kingdom Hearts games, borrowed my friend's SNES to play FFVI (Sabin is the man), and watched Final Fantasy Unlimited. The only good thing that can be said about that show is that Kaze and Makenshi are two of the coolest guys in Final Fantasy. Other than them though...the show sucked.

I just beat FFIX, and for a game where the main character has a tail, I enjoyed myself a good deal. Kuja's clothelessness got on my nerves, but overall it was a very good homage to previous FF games. I find it a little disturbing though, that after deliberately neglecting Eiko for most of the game, she was still the character that contributed the most towards the final boss's demise. Oh well.

At the moment I'm struggling through the end of Final Fantasy IV for the DS. It seemed like Square Enix went and took what people were saying about wanting it a bit more challenging and blew it way out of proportion...I'm all for boss fights that kill me a couple times while I'm trying to figure out a decent strategy, but if I'm at the point where it takes 20+ fights with the enemies in the dungeon just to level up once and the boss STILL mops the floor with me, I think the difficulty curve has been spiked a little too high. Besides, at that point the leveling up becomes grinding, which is why I stay away from MMOs. Fun game anyway, I just wish it would let me see its ending...

Retrieved from "https://finalfantasy.fandom.com/wiki/User:Gendreavus?oldid=3210386"
Community content is available under CC-BY-SA unless otherwise noted.