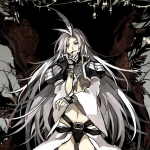 Hi there, my name is Flüstergras – you may also call me Flüster or whatever nickname you may find for me, but please do me a favor don't be too lazy to type Alt+129 to get the letter ü. I live in a small town in Germany, near the Dutch border (I don't speak a word of Dutch though) – this is why my English is not perfect, so feel free to correct any mistakes you may find. Actually, improving my language skills is the main reason why I'm on the Final Fantasy Wiki.

Still, I don't do a lot of edits here; my activity here is limited on fixing typos and voting in the DNC, some time ago, I also added interwikis to the German Final Fantasy Almanach, but since the bureaucrat there considered me a troll for being nice to a newbie, I won't do this anymore. Now I look for another thing to make myself useful, like uploading screenshots.

I have a total of 22 Final Fantasy games, including any part of the main series up to X, two versions of IV (Advance and DS, though I don't like the game that much), the normal and Zodiac version of XII, three parts of the Tactics series, both Dissidia games and some other spin-offs. I completed eleven of them and finished the storyline of five other games which include several superbosses I didn't defeat yet, or bonus dungeons and sidequests I simply don't want to complete. The first Final Fantasy I ever played was VIII which made me think I was too stupid to understand the plot. Now I know there actually is none – I refuse to call that holey crap the game tries to tell me a plot. My favorite part of the series is IX which has the best protagonist, best villain (tied with Kefka) and by far the best soundtrack. Zidane and Kuja are also my favorite characters in Dissidia – Kuja was my first Level 100 characer, and Zidane is the only one I ever managed to complete Inward Chaos with.

I'm currently writing a German walkthrough for Dissidia 012 (maybe I'm gonna translate it someday, if someone's interested), which you can visit here. To illustrate my fighting style (which is not the best, I must confess), I upload boss battle replays on my YouTube channel where you can also find some other videos... Feel free to watch, maybe to like the vids or even subscribe my channel.

Some pieces of artwork and other images from those guys appearing as playable characters in Dissidia. Because my epic Dissidia 012 walkthrough needs color and stuff.

Retrieved from "https://finalfantasy.fandom.com/wiki/User:Fl%C3%BCstergras?oldid=3213975"
Community content is available under CC-BY-SA unless otherwise noted.