The Ivalician Language (イヴァリース言語, Ivarīsu Gengo?) featured in Final Fantasy Tactics appears in a few places. They can be seen on the big circular zodiac sigil. The one in the opening movie of the PlayStation version and also in the background when the player access the save screen. It is also found on the floor in the "job class demonstration" opening movie demo.

English players could never think to discover this by themselves since several words appeared in the Sound Novels, a feature that is exclusive to Japanese players because the Sound Novels were dummied for the English release. These words are written in both katakana and Ivalician while the English players only have the blurry world map and the zodiac sigil to go on with in deciphering the Ivalician alphabet.

The Ivalician alphabet consists of the following known letters. There is no Ivalician equivalent that has been found yet for the letters Q and X.

The following is what has been translated so far into English from Ivalician, the only thing left are the remaining untranslated words found on the world map which cannot be translated due to it being low resolution/having small blurry characters.

The names of all twelve Lucavi can be found on the zodiac sigil along with their respected Zodiac signs and their Ivalician names. 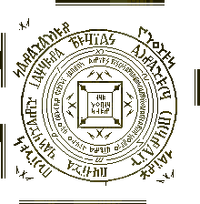 The magic circle that appears when Loffrey Wodring casts a spell to open the portal to the Necrohol of Mullonde underneath Orbonne Monastery inside the Monastery Vaults.

The following words can only be found in the Japanese version.