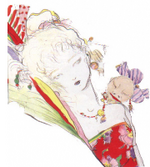 I'm kinda a noob here, so be patient with me, please!

Well... what could I say? Something related to Final Fantasy, I guess. First of all, I'm Catalan, so I have only played Spanish versions of the series. Guess I'll be able to provide some trivia because of that, but my English may have some problems sometimes. Anyway, I have been playing Final Fantasy games since I was... eleven or twelve, I think, with Final Fantasy VIII. And it's been like nine or ten years since then, so I could say I have some experience.

How many people is gonna hate me if I say my favorite installment is Final Fantasy VII and my favourite character is Sephiroth? Typical, right? By the way, I hate how he is spelled in Spanish, "Sefirot".

I have beaten Final Fantasy I (Advance version), VII, Crisis Core (I didn't like the epicness of the ending, it was so much realistic and better in VII), VIII (the Rinoa-Ultimecia theory makes its story SO much interesting), IX (kinda easy, but great), X (great too, right? I didn't like Tidus at first, I must say), X-2 (come on, the battle system was nice), XII (not the better installment, for sure, but it's still good from my point of view), XIII (so dynamic! Also good story, right?), Tactics (War of the Lions), Tactics Advance, and Dissidia. Also, I've played II (not much), IV (I couldn't defeat Zeromus and eventually I got tired), V (also near the end), and VI (Kefka's Tower was just annoying). I've played and beaten other Square titles too, like the Star Ocean series, but in my opinion there's nothing like Final Fantasy in RPG gaming.

And, well... I don't know, I'll try to be helpful around here. It would probably make more sense if I joined the Spanish Final Fantasy Wiki, but compared to the English one, that one sucks. It really does. *Sigh* Whatever... take care, people.

Retrieved from "https://finalfantasy.fandom.com/wiki/User:Crimson_Jealous?oldid=2021605"
Community content is available under CC-BY-SA unless otherwise noted.