A seeress from the distant past who is reborn in each timeline. A sweet, innocent and beautiful girl, she lives only to die and has to watch the future unravel and destroy in front of her eyes. Cursed to endure visions of despair, she accepts her burden willing, smiling as she does. She acts as a mature and responsible voice to Serah, gives hope to Noel and comforts Caius. Caring for all those she knows, she willing accepts death, if it means the restoration of the true timeline. One full of smiling faces.

Paddra Nsu-Yeul: the girl willing to embrace her own demise in the hope that others can be happy. The girl that will never be forgotten.

To apply for a membership for Yeul's Fanclub, please follow instructions on this page, in the "Applications" section.

All members get to have this userbox to place on their userpages.

They also get a specialized membership pass. More information on the specific memberships page. 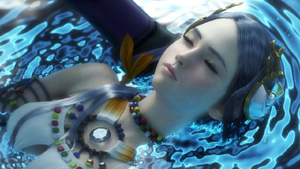 She is the seeress of many an age. Every generation, one would perish and one would be born. At the end of her life, Paddra Nsu-Yeul would have a vision of a future and pass away from it draining her life force. Her Providence's gift doubles as a curse - and the innocent girl's life is cut tragically short.

The immortal Guardian, Caius Ballad would pick up her fragile form , shedding silent and invisible tears. With every death, he would tear himself apart - eventually resorting to seek an end to the curse he had been given - immortality. Seeking an end to his suffering and seeking to save Yeul, he sets out on his mission to end Etro's existence.

From the moment of her initiation as the Goddess' protector, Lightning is driven into a conflict with Caius. As she gazes out onto the tumbling waves of endless chaos in this forsaken land of Valhalla, Caius lays a Yeul's body to rest. Uttering the words "This eternity was never your desire. Is that not so, Yeul?", he engages in combat - summoning hordes of rift monsters to his side.

This is currently the only existing CGI Image of Yeul, aside from her render.

To vote for the next Featured Media, please visit this link.

To see all the Featured Media, please visit this link.

NEW PROJECT
Each week, alongside the featured media, one piece of fan-made Yeul based media will be featured. This will be selected by an admin or mod.

--Credits to "maluga", the artist, for this drawing featured on "zerochan.net".

NEW PROJECT
In celebration of the rebirth of me, the fanclub and just to spread happiness (as part of Cool's Project Positive (INFO COMING UP SOON)), this section will feature some cool, upbeat video from Youtube-landia.

WEEKLY SPOTLIGHT: Check out Ceej's awesome-sauce song "Across My Heart".
Template loop detected: Template:Video
While watching JacksGap, Jack featured her as her cover of his "JacksGap Song" was amazing. Checking out her songs lead me to this upbeat and great song!

All throughout history are different things all can look at...

Please inform Coolawits on his talk page if you run a Fanclub and would like your's to be mentioned on our wall of Fanclubs.

If you are a fan of colosseums or arenas - here is a list of a few:

If you have an arena and would like to put it here for advertisement - please follow instructions on this page. Note - anyone can add their arena.

NOTE: WE STILL NEED MORE FANFICS. PLEASE NOTIFY COOLAWITS ON HIS TALK PAGE IF YOU WOULD LIKE YOUR FANFIC TO BE MENTIONED. YOU WILL NEED TO SUPPLY:

Retrieved from "https://finalfantasy.fandom.com/wiki/User:Coolawits/Yeul_Fanclub?oldid=3213605"
Community content is available under CC-BY-SA unless otherwise noted.