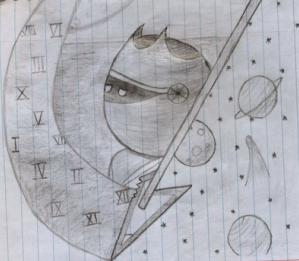 A sandstorm swept fiercely through a desolate wasteland. A sharp spear penetrated through a robot, revealing malfunctioning vital parts. With a grunt, CL-528 removed his spear from his adversary's body, which is dripping with blood red oil. Bodies of other robots lay scattered about, pelted at by the fierce winds of the sandstorm, impaled with the same weapon. Sheathing it, he ventured through the wasteland, unharmed by the sandstorm, unregretful of his deeds.

"I better leave before more of them comes..." CL-528 thought to himself. With the cloak of the sandstorm hiding him from detection, he focused his power through the time seal gems attached to his wrists and legs. Pulling his arms back, he thrust them forward with one quick motion, causing the gems to glint and a bright, blue portal to appear before him. Suddenly, the rabid barking of dogs came closer and closer. Without hesitation, CL-528 strided into the portal. The portal itself disappeared upon entry, and so he walked through a swirling corridor of blue light. A bright light engulfed him as he walked ahead, finding himself now in a whole new world, possibly of a different time period.

"...Its been awhile since I've seen these." the robot thought to himself as he looked beneath his feet, seeing fields of healthy green grass. He looked up into the sky, embracing the cool, crisp air as it passed through his metallic, dull-coloured body, which was once, eons ago, a shiny gold and copper finish. He walked through the fields of green, but suddenly stopped, sensing something is amiss. Looking to the west, he feels a strange, uneasy aura emanating from beyond the mountain range. Quickly, he ran off westward through the field, hoping to find the crux of this problem; setting off on a new chapter of his wandering journey...

Built at an unknown time and age, CL-528 traveled through time and space without much of a goal. He traveled from world to world, carrying his trusted spear, the Shattered Blue Orichalcon with him, fighting many battles through desolate future wastelands where war and pollution was rampant. He does not know who created him, and for what purpose he serves, so one day, waking up from a long slumber, with his self-aware electric brain he decided to wander. With only his spear, his pre-programmed attack styles, built-in mimicry, and time seal gems attached to his wrists and legs, he led a solitary life of violence until that day...when; using the gems to create a portal, brought himself into a world much different to the ones he had been to. Looking up the sky, he senses an air of uncertainty looming beyond the mountains to the west. Unsheathing his spear, he set off through the fields of green...

A Cave to Baron[]

Approaching the mountains, small patches of land lead to a small cave on its face. Some trees and tall vegetation litter its surroundings, with a strangely made fountain among a pile of bushes for weary travelers to drink on. The robot refused to waste any more time, so he ventured inside. It was a somewhat straightforward path, with tunnels leading to dead-ends. The cave was all too quiet, and it made him uneasy in such an environment. Venturing further, the silence was drowned by the gradual pouring of water in the distance. The cave path led to a large area below, divided by the steep ledge. A bright light shines in the distance, revealing itself as an exit. CL-528 dropped and held onto the ledge, kicking off and landing on the ground safely. As he casually approached the door, he heard something falling from above him. Quickly dodging out of the way, it was a crudely-made cage trap. From the walls, floor, and ceiling, strangely-clothed vagrants burst out of them, tossing away the disguises. One appeared from behind and laid his sword on the robot's neck.

"Givvus all your money and we'll let you go." he said menacingly, speaking in a strange accent.

"I don't think so..." CL-528 gave a swift heel kick to the man's jewels and grappled him, throwing him against the oncoming hoard of bandits. The ones that jumped out of the way came face to face with his robotic fists as he sunk them through their gut and forehead, leaving them heavily incapacitated. As they writed on the floor, CL-528 set off for the exit.

"Don't worry, you'll live." he said gruffly. "Might I ask where I can find a place to rest?"

"B-Baron..." the man who had attempted to mug him said in a shrill voice. "outside....straight ahead..." he passed out from the pain. CL-528 ventured out of the cave and saw himself in more fields of lush grass, coupled with streams leading out into the sea. He set off, in search for this nation of Baron...

Not necessarily important, but I'll stick it in anyway if any type of scenario is triggered (though it may reveal something more about him)(Note: I can't find a proper video for Darkness Nova, so the video will have to do...also, I can't seem to find any more videos for Legend of Mana and Rudra no Hihou, so that really sucks...):