First off, it's advisable for your White Mage to learn !White and your Black to learn !Black. Then you can make your White Mage a Black Mage with !White spells and vice versa. During this process, my Monks learned Focus.

Board the ship and head east. There are monsters in the canal, but a physical attack or Thunder will take them out. Until we meet:

Mages cast Thunder and heal, other classes attack. Not much to say, except that he does have one move called Tail Screw which is annoying. It drops your HP below 10, but you can heal it off.

More stuff happens, and we arrive in the Ship Graveyard. Darn it.

Monsters here are undead, so they're weak to Fire and Cure. Go to the right until you find a door. Go inside and down the stairs. In the left room is a Tent, right is some stairs.

On the second floor of the shipwreck, go south down to the next room and next stairwell. On the third floor, go to the right for a Potion, left for another stairwell. And then, A SHOCKER! OH NOES! Yeah, that was obvious. You can use the beds to heal.

In the door Lenna took is a consecrated circle and another stairwell. Take it, go along the sinking boards to the right when you get outside, go inside the next shipwreck to claim a World Map, down the stairs for a Phoenix Down and two Antidotes. 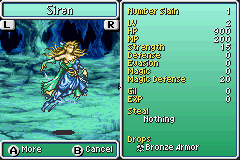 Outside, jump across the rocks and inside the chest is a switch to create a whole new ship which you can climb across. For this, make sure one of your heroes is a knight!

Siren starts off as a weak character who casts weak spells like Libra and is immune to magic. Have your physical attackers go all out, mages do nothing.

She then turns undead, and your mages get to shine with Fire. Have your knight Guard, which will absorb most of Siren's powerful attacks for all four allies. Keep repeating this until she returns to her human form, then return to your physical strategy. She drops either a Bronze Shield or Bronze Armor after defeat.

More lovely music. Rest at the inn (it's only 10 gil -- I wish my vacations were that cheap). Then buy the best equips as well as Sleep, Silence, and Protect.

Hint: switch to a thief in towns. You then see invisible passageways in walls. For example, in the pub, you can sneak over to a barrel as a thief to find 1000 gil. Poor guy; actually, he wants to cast Meteor on his wife's mom, so maybe this is justified punishment. Also make sure to play the pub's piano; this will be important later on.

For comparison, my team was a:

BTW, once you learn Barehand with a monk, !Guard with a knight, or !Blue with a Blue Mage, there's no point in keeping them on that job. Those are the abilities that make that job worth using.

The North Mountain is to the northeast.

There is an enemy here called Headstone which will teach the Blue spell Flash but only casts it if use an Ether on it. Don't waste one; Flash lowers accuracy and is useless.

Walk north and around for a Phoenix Down. Return to the entrance, go west, and down for a 'Gold Needle. Leave through the door to the left.

Continue up and around. In the bridge area, avoid the purple flowers. They deal damage and inflict poison. You'll then come to a consecrated circle. Use a tent and save. When you go west, there is a boss coming up...

Lenna starts this poisoned, so have your White Mage cast Poisona on her. Magissa will usually cast weak Black spells as well as the Blue spell Aero, but she can also cast Drain, dealing 170+ damage. That's bad, so beat Magissa quickly. If you have a Level 8 (no higher no lower) Blue Mage, cast Goblin Punch on her to deal nice damage (500+)!

When she takes some damage, Magissa will summon Forza, who is much more dangerous. Forza deals 70+ damage with a physical attack to a front row fighter! Your White Mage should be on full time Cure duty and don't be afraid to use Phoenix Downs. However, the Black spell Sleep works on him, so if you cast it on him he won't attack until you attack him. Use this time to eliminate Magissa and restore yourself to full health before going on an all out assault. Forza is also weak to Level 8 Goblin Punching.

After the battle, you get a Power Drink and Whip.

After the battle you can go north to find a wind drake! How do they ride that thing? Well, anyhow, this opens up lots of new places on the World Map (the drake can't fly over mountains or land in forests or oceans, however). First return to Carwen to rest and restock up on items, head south, and go around the mountains to the old starting point of the game (by the old meteorite). Walk into Tycoon Castle.

Rest at Tycoon Castle for free by talking to the chancellor in the throne room (right by the 2F entrance). NO! SPOILERY STUFF IS HAPPENING!

Yeah, return down from the guest room to the lower floor, with three jugs and and an old guy in purple. There is a Hi-Potion hidden in one of them. Leave to the throne room and take the right door, in which are jugs with a Cottage (how is that fit in a jug? Ah well), an Ether, Elixir and Phoenix Down. Go up into the main throne room and take the right stairwell up several flights. The room with the jugs has a Ether, Maiden's Kiss, Mythril Helm, and Phoenix Down.

Return to the outside area with the green-haired ladies you saw on your entry, and leave. That's the end of this sidequest.

Walse is directly south of Carwen. Optimize your equipment, but don't bother buying new magic, because it's all Summoning and Time spells, which you can't use yet. Go into the castle.

Go to the third floor, and talk to the king. Idiot is amplifying the Water crystal and might make it shatter. Anyhow, he runs off to check on stuff, allowing us to steal -- I mean, restock on supplies -- in the castle.

Climb up enough flights of stairs to the fifth floor, then use the consecrated circle and grab the Phoenix Down. Climb to the seventh floor, and take the left vines for a Silver Armlet. The right vines have an Ether and the exit to the eighth floor, which contains the Water Crystal and...

The Garula is annoying as heck. He only does physical attacks but does them several times per turn, each dealing ~50 damage to a non-knight and ~15 to a knight. Because of this your characters save your white mage should be knights. Heal, heal, heal. There really isn't much strategy involved, just attacking and trying to outdamage him. He only has 1200 HP and drops a Hi-Potion.

You get new job classes (you have to pick them up yourself), and just in time -- I'd learned all the good abilities of my old:

Notice the one shard lying by itself. This will be important later on.

Leave the tower. Stuff happens, but don't worry. Syldra comes back to life, so who cares. Return to Walse, buy items, rest up, select your new jobs. Don't bother with the sidequest to get Shiva just yet; I recommend waiting until you get Ifrit or at least Fira, because it is hard. Also, note that you can now use the Time and Summoning spells (although the Summoning spells are only for completionists -- they are useless at this point), so buy them before going to the Walse Tower meteorite.

Talking about the jobs, all are pretty good except Berserker and Red Mage. Berserker doesn't do anything except attack (he can't even use items!) and Red Mage is a jack of all trades, but isn't very strong. Even so, one of your mages should stay a Red Mage for a while, because of its final ability, !Dualcast, which is exceptionally strong, especially when combined with !Mimic, which you won't get for a while.

Retrieved from "https://finalfantasy.fandom.com/wiki/User:Catuse167/Sandbox/Walkthroughs/Final_Fantasy_V/Catuse/Part_1-2:_To_the_Water_Crystal!?oldid=1188273"
Community content is available under CC-BY-SA unless otherwise noted.