I've seen things you people wouldn't believe. Attack ships on fire off the shoulder of Orion. I watched C-beams glitter in the dark near the Tannhauser gate. All those moments will be lost in time... like tears in rain... Time to die...

Replicants are like any other machine - they're either a benefit or a hazard. If they're a benefit, it's not my problem.

...And I'm back. After a few months on a break (due to starting university), I've decided to return here and make myself useful. I think I left a walkthrough half-finished, so that will be a definate short-term target for me to complete.

About me (Non-FF)[edit | edit source]

If you like a lot of chocolate on your biscuit, join our CLUB.

I usually do edits on the VI, VII, VIII and IX pages, and on the music pages. I'll also make edits about other things when it suits, but I generally keep to what I can write about. I've also created a couple of pages, such as:

I'm a patroller on Here, too. These pages are created by Sorceror Nobody, so that's a mark of quality!

If you impress/distract/scare me with something cool/funny/downright weird (Delete as appropriate), you have a good chance of obtaining this award. I'll keep a list of recipients on here for your viewing: 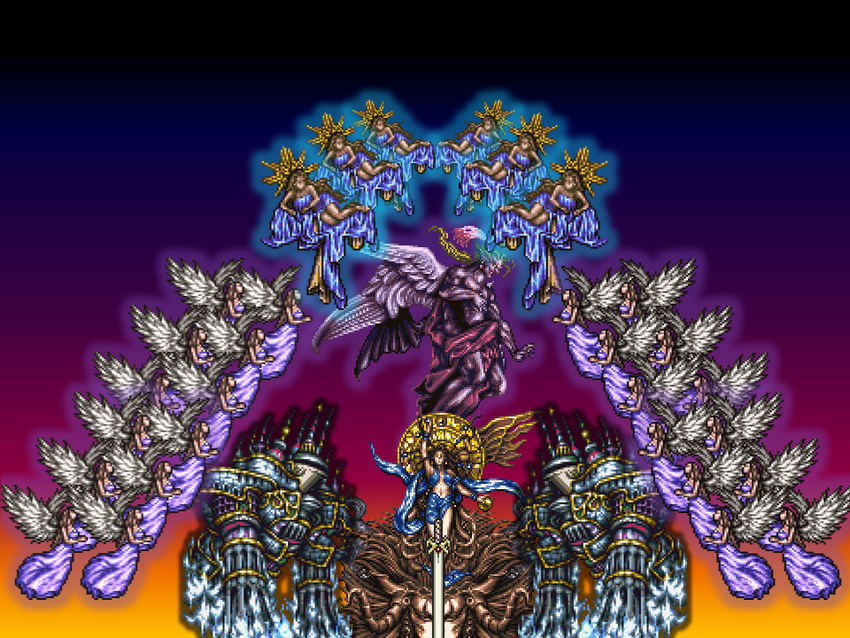 This picture is sponsered by Kefka's Demolishion Service. Need a demolishion job, quickly? Let the Light Of Judgement do the dirty work for you! Low-Cost and very efficient!

My thoughts on Final Fantasy And Other Things[edit | edit source]

I decided to make a small tribute to what's considered the greatest decade ever. This page has been created for fellow children of the 90s to remember how brilliant everything was.

I've been able to expand this article so much, that it has been given a full page just to itself. You'll find it at User:Captain Darkblade/Alternative Final Fantasy Music. Just like before, however, any ideas, queries or thoughts about it can been placed on my user talk page.

I was browsing the Dragon's Neck Colosseum the other day, and a thought hit me. Hit me quite hard, in fact, and I've still got the bruise to show it. Why don't I create a different version of the battle arena, but have characters from the games pitted against iconic movie characters, literary figures or superheroes, as well as each other? So I've given it some thought, and this is it.

Please visit the Flan's Elbow Colosseum, too. It's also made by Sorceror Nobody, and it's excellent. Just say that The Captain sent you across!

I also made a review page for the three Black Mages albumss. It's right over here.

I Have A Theory[edit | edit source]

I would recommend looking at this at full size. Really- it's pretty good by the standard of my home-made images

These are those table things for showing the world your most-and-least games and characters. These are mine.

That's all I'm going to do for now. If you have any queries or advice, please leave something on my Usertalk page. Thank you!
Captain Darkblade