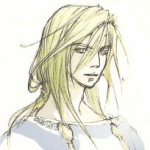 Blykus is an editor from the Final Fantasy Wiki and a semi-regular at the IRC channel.

Blykus joined the Final Fantasy Wiki in January of 2007 due to his interest in the Final Fantasy series. He started off as a lazy editor, only making small contributions here and there. He would vote in the Dragon's Neck Colosseum and make random forum responses from time to time. All in all, he was not a particularly memorable individual. Blykus would leave the wiki and not return until a full year later.

Upon his return, Blykus would begin making more useful edits and create himself a talk bubble. It was around this time that he started to attend the IRC channel and began making friends there. While he went on to contribute to the wiki for a while thereafter, real life responsibilities and diminishing interest caused him to fall to the wayside once more.

Time will tell whether or not Blykus can become an active member of this community again.

The name Blykus is derived from a song called "Blue Sky" off of the Final Fantasy VIII: Original Soundtrack.

Retrieved from "https://finalfantasy.fandom.com/wiki/User:Blykus?oldid=3208175"
Community content is available under CC-BY-SA unless otherwise noted.