Urutan Eater is a beast/titantoise-type enemy in Final Fantasy XII. It is part of a sidequest in the Nam-Yensa Sandsea. The player can steal the Ancient Sword from them.

Note: In the bestiary, the Urutan Eater appears under Emeralditan.

Being a primal race, the oldest of the long-lived great titantoises. Their existence is referred to only briefly in legend, and in the absence of a verifiable sighting, they were considered to be a myth for centuries. However, in recent years, they have suddenly appeared, and are feared in some regions as the Urutan Eater, scourge of the Urutan-Yensa.

The oldest chronicles relate the properties of a rare metal called scarletite. In an age when men lived under the watchful guard of the gods, the gods granted them scarletite, for they were favored of their creators. Modern alchemy has to date failed to reproduce this metal, lending credit to the theory that the gods did exist, and are not merely the inventions of a devout imagination. Only by mixing other metals and lowering the purity of this substance may it be worked with modern tools.

The Urutan Eater is a giant tortoise that takes its name from the trouble it causes for the Urutan-Yensa. Realizing his people could not defeat the monster alone, a lone Urutan asks a moogle in the Nam-Yensa Sandsea for aid. The moogle mentions the problem to travelers on their way to the Tomb of Raithwall. The party fight and defeat the creature.

The consequences are severe; the Urutan-Yensa consider it a crime and a dishonor to ask outsiders for help. The rogue Urutan is executed, but leaves behind a flower, something rare in the desert. The Eksir Berries from the flower prove a great help to the travelers, as they weaken the Garuda guarding the Tomb of Raithwall. 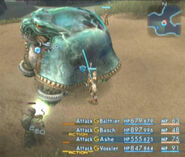