Urutan-Yensa are lords and masters of the great sea! We seek the aid of none!

Queen of the Urutan

The Urutan-Yensa are a race in Final Fantasy XII. They are the "Kings of the Sandsea", a name bestowed by the people of ancient Galtea, befitting their presence in the Ogir-Yensa and Nam-Yensa Sandsea.

Urutan-Yensa evolved from crustaceans, and their bodies are thin as if suffering from scurvy. They are divided into different tribes, each ruled by a queen who is noticeably taller than the others. All Urutan-Yensa, besides the queens, are covered in layers of clothing. Some believe they do this to hide their hideous bodies, while it may be due to the environment of the Sandsea.

The speech of the Urutan-Yensa is animal-like. This, and their violent tendencies, keep them from adapting to hume society. Because of their low intelligence, Urutan-Yensa cannot wield complicated instruments or machines. They use bows and swords, as well as magicked motes in battle. All Urutan-Yensa are weak to Wind.

Your words are the howling of the sand to my ears! I condemn you to dust!

Queen of the Urutan

In the manga, Basch reveals that the Urutan-Yensa attacked his village when he was young, numbering in the hundreds against only three trained warriors. He promptly describes his past, "like hell."

During the game, Ashe's party crosses the Sandsea toward the Tomb of Raithwall while running into the Urutan-Yensa, who try to stop them from treading through their land. They eventually find several Urutan-Yensa battling a colossal tortoise, and fell it. Afterward, a friendly Urutan-Yensa thanks the party, but becomes admonished by his kinsmen and the queen, who orders the wayward Urutan-Yensa to be put to death for having asked help from outsiders. The party can find berries growing on the spot where he had died after the other Urutan-Yensa depart.

The Urutan-Yensa and the rarer Urutan Exile are fought as enemies in the Sandsea.

The Urutan-Yensa resemble the Tusken Raiders, a species from the Star Wars series. Both tribes live on the desert and are unfond of trespassers.

The design of the Gnath beast tribe from Final Fantasy XIV also resemble the Urutan-Yensa. 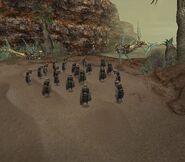 The word urutan is the Malay or Indonesian word for "sequence". It may also mean "massage" and "order", in terms of a noun. As an objective, it means "ordinal".