Newborn (Interlude)
16 (The After Years, 17 in the original version)

Ursula is Yang's only daughter and the first princess of the kingdom of Fabul. She was brought up watching her father's form and training and has yearned for such strength since she was a young girl. However, she is irritated by her father, who refuses to give her lessons. The heart of her strength comes from her mother, the queen.

Princess Ursula is a playable character from Final Fantasy IV: The After Years, the daughter of Yang and Sheila as well as Cecil and Rosa's goddaughter, Ceodore's godsister and Golbez's godniece. As Yang's daughter, she is the princess of the Kingdom of Fabul. Ursula wants to be strong like her father, but he refuses to teach her.

Ursula has hazel eyes, green earrings, and blonde hair tied back in pigtails with a small red rose to the side of her head. She wears a red modern-style oriental dress called a cheongsam with green flower and vine details. Ursula wears a yellow band on her upper right arm and gray shoes.

From a young age, Ursula has wished to become strong like her father and wants him to train her, but he refuses no matter how many times she begs him, scolding her for not acting in a manner fitting her position as princess. Her determination to have her father's strength is so strong she travels up Mt. Hobs alone to train in secret. Through her journey, she learns what Yang has tried to teach her: that someone with the strength of heart needed to protect friends and family is stronger than someone with physical strength alone.

Ursula is born during the events of Final Fantasy IV Interlude. Cecil and Rosa, being witnesses of the birth of Yang's child, become her godparents and it's Cecil who, under the request of her father, names her. 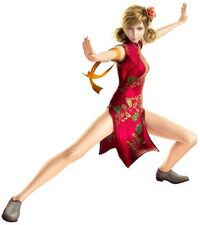 Ursula grows up a strong and capable woman, but Yang refuses to train her as a Monk as he believes she is placing too much value on strength and power. Frustrated, Ursula flees the castle and travels to Mt. Hobs, where she is attacked by a Mom Bomb. She is rescued by Yang who reprimands her, but Ursula explains she was going to inspect the impact site of a meteor that struck in the west, and didn't tell Yang because she knew he wouldn't allow her. Yang agrees to let Ursula accompany him, and the two inspect the crater and head back to Fabul.

On their way back over Mt. Hobs they spy the Red Wings approaching, and Yang orders Ursula and Sheila to take refuge. The Red Wings attack as what comes to be known as the Second Battle of Fabul, and when Yang is pushed back to the throne room he sees Ursula and Sheila still there, wanting to help him. Yang and Ursula battle Dark Kain to protect the Crystal, but he jumps over them and claims it before escaping.

Yang sets sail to Baron to speak to Cecil, and Ursula accompanies him. An attack by monsters damages the ship's fuel and they make emergency dock at the Adamant Isles Forest to find palm oil fuel in the forest. Yang sets out alone, and when he fails to return by night Ursula and a trio of Monks set out to find him. They find the palm oil tree but are attacked by an Adamantoise. The Monks protect Ursula from the beast but fail to penetrate its thick hide.

With the Monks weakened Ursula steps forward to fight, and remembering a training exercise she observed, unlocks her Tenketsu ability, exposing the Adamantoise's weak point. Yang arrives and the two defeat the beast. Having witnessed Ursula's compassion when she protected the Monks, Yang accepts the strength of her heart as well as her body and takes her as his newest disciple. The group returns to the ship and sets sail again, but the ship is destroyed by Leviathan.

In The Crystals, Rydia, Edge, Luca and the Man in Black find Yang and Ursula recovering in Kaipo. With a frying pan and ladle from Sheila the four knock them to their senses and they rejoin the party. In the ending, Ursula is seen sparring with Yang, tired but unwilling to give up the fight.

Ursula's HP is average while her Strength and Stamina are high, though not as good as Yang's. Ursula's main strength is her high Speed; she is the third-fastest character in the game, after Edge and Tsukinowa.

Like her father, Ursula is a monk and relies on attacking physically. She has Yang's Kick ability, along with Chakra and Tenketsu. Chakra heals an ally of some HP and status ailments, while Tenketsu attacks an enemy for normal damage, occasionally doing an automatic critical hit, dealing elemental damage to hit the enemy's weakness, or instantly killing them. Ursula can use the following Band abilities:

Ursula can equip the same equipment as Yang, with the addition of the female-exclusive equipment. This gives her the unique ability to equip the Queen's Whip instead of a claw, giving her back row-compatibility with no reduction in her attack power.

Ursula joins with an Ice Claws on her right hand, a Lightning Claws on her left hand, a Feathered Cap, a Bronze Breastplate and an Iron Armlet. 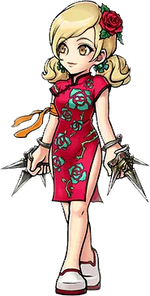 Ursula appears as a playable character. 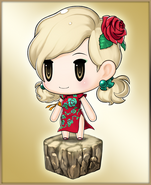 Ursula is a playable character who could be initially recruited during the Challenge Event Like Father Like Daughter as a First Time Reward for completing the event's Fabul Castle - Throne Room stage on Classic difficulty.

Like Rydia and Porom, Ursula's official character art for Final Fantasy IV: The After Years was altered for game's North American release to make her outfit less revealing, now sporting a pair of shorts that cover her thighs.

Ursula with Yang in the opening FMV for The After Years in Final Fantasy IV Complete Collection. 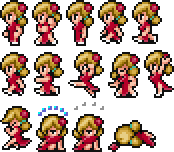 [view · edit · purge]Ursula is a female given name which means "she-bear". In the Final Fantasy Character Ultimania, Ursula was originally the name of her mother, whose name was retconned to Sheila. In katakana, her name can also be read as "Ashura", a group of Hindu deities.