SO
Urd Bahamut is a neutral-elemental Eidolon from Final Fantasy Dimensions II. It is an alternate version of Bahamut that can only be equipped by the Deathlord. The summon is automatically obtained when the Deathlord joins the party during the events of the Interlude chapter.

Urd Bahamut is a decent signet for the Deathlord when he initially joins the party, providing decent HP and magic stats. The summon's Trine Breath ability for the Deathlord is a decent attack to deal multiple attacks to groups of enemies and deals extra damage to dragon-type enemies. However, the signet's usefulness is eventually outclassed as the player progresses through the game's Eureka arc.

In the original free-to-play versions, Urd Bahamut could only be obtained through the game's summon draw shop and could be equipped by any party member. Urd Bahamut was an SS+ rank signet.

The official description from the free-to-play versions describes Urd Bahamut as the Eidolord that controls the past Spacetime. Bahamut Urth's overall design is based on the summon's appearance from Final Fantasy X.

The following are the abilities the Deathlord can learn from Urd Bahamut: 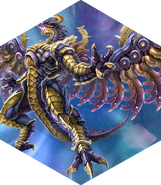 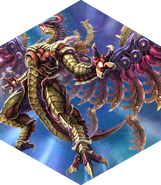 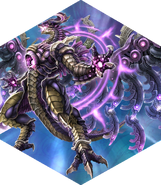 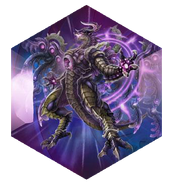 [view · edit · purge]Known as "Urðr" (Old Norse "fate"), Urth is one of the Norns in Norse mythology. Along with Verðandi (possibly "happening" or "present") and Skuld (possibly "debt" or "future"), Urðr makes up a trio of Norns that are described as deciding the fates of people.