Detects by Sound
Battle Stances
List of Uragnite Enemies
Uragnites are massive bivalves in Final Fantasy XI found only near the warm waters in Bibiki Bay, on Purgonorgo Isle in Final Fantasy XI. They exhibit some unique behaviors. For example, when damaged, a Uragnite retreats into its shell. While there, it is resistant to both physical (-75%) and magical damage, and gains a powerful Regen effect that cannot be dispelled. Also while in its shell, it reacts to physical damage with a very powerful area effect Poison (about 12dmg/tick).

Adventurers seeking to bring down an Uragnite and obtain its rare and valuable shell must undertake a difficult fight. One proven method is to employ perfect timing, building up TP while the Urganite is in its shell, and then, when it pops out, immediately using both weapon skills and your most powerful magic attacks. Beginning a fight with Ancient Magic can also be useful, because when it attacks the mage, it can be forced into its shell with physical attacks. 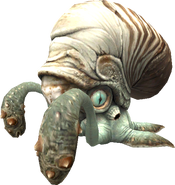