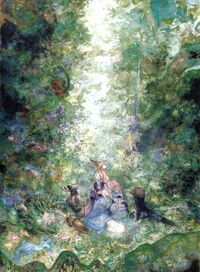 "Unrequited Love" (とどかぬ想い, Todokanu Omoi?), also known as "Unfulfilled Desire" or "Where Love Doesn't Reach", is a theme from Final Fantasy IX. It is a slower, more melancholy variation of "Zidane's Theme" and plays while Zidane tells the story of his past to Garnet during the night at Black Mage Village. Later, it becomes the background theme to Alexandria from disc 3 onwards.

A piano arrangement of the theme performed by Louis Leerink is included on this album. This version can also be found on the Final Fantasy S Generation: Official Best Collection and Potion 2: Relaxin' with Final Fantasy albums.

An arranged version with vocals is included on this album, called "Mawaru hikari" (Light goes around). Its lyrics have been written by Manami Kiyota who also sings the vocals, and it is arranged by Yuji Hasegawa, who also plays the acoustic guitar on the song.

Flowers swaying by the roadside, embraced by the wind

Seeing them earnestly taking in the light, a smile escapes

This life, with so many miracles piled atop one another

Obliterated by battles under a distant sky

Whether into a rubbled nook or onto a green leaf
Light shines down in the same way, never ceasing

Someday the earth will sink and become sea
Even so, I pray we can meet up here again