This healing Esper casts Remedy on the party with its single magic horn.

Unicorn (ユニコーン, Yunikōn?) is a recurring summoned monster in the Final Fantasy series. It is a healing summon.

Unicorn makes an appearance as one of the Animals in the Ranger job class's skillset. It fully restores the HP and MP of the entire party. The character's minimum level when it's possible to call for the Unicorn is on level 60. The chance of getting the Unicorn becomes very high if the character using the command is at level 99, as any random number between 60 and 99 would call the Unicorn. 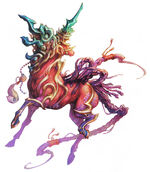 Summoned by the Summoner job class, and learned from the Pure Staff for 200 AP, Unicorn will restore HP and cure any status ailments in an area two outwards and one diagonally from the center of origin at the cost of 12 MP. Unicorn has a spell power of 40 and is considered Holy elemental, and is stealable through the ability Steal: Ability.

Unicorn is again summoned by the Summoner job class for 16 MP, with the same effects from Final Fantasy Tactics Advance. It is learned for 250 AP through the Cleansing Staff, costing 16 MP to use and having a range of 4.

Unicorn appears as a boss. 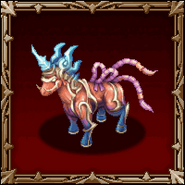 Unicorn is an esper in Crystal Defenders W3 that increases the attack power and speed of the party during one wave.

Thy gentle spirit may yet lift the tenebrous veil that shrouds this land. So be it. I will lend thee my power!

Unicorn appears as a summon. He is found in the Divine Forest during the Chapter: Pride Regained, the Warriors of Light must talk to him to retrieve the summon.

Healing Horn is capable of restoring a major amount of HP for the party, which is about as much as Curaja, and removing Sleep, Confuse, Paralysis, Berserk and Curse. It requires 42 MP to use.

Depending on Unicorn's type and rank, it can teach the user abilities that support the party in battle: 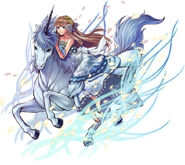 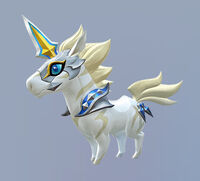 In Final Fantasy Fables: Chocobo Tales, Unicorn is a wood element card, and has six cards under his name. He is also the guardian of the Earth Crystal. Unicorn is also a main character in the Unicorn and the Town Musicians story book.

[view · edit · purge]The unicorn is a legendary animal from European folklore that resembles a white horse with a large, pointed, spiraling horn projecting from its forehead, and sometimes a goat's beard and cloven hooves.