The Unicorn is a light-elemental Eidolon that appears in Final Fantasy Dimensions II. There are two signets of the Unicorn available to Aemo; a weaker version that teaches her Esuna white magic abilities, and a stronger variant that teaches her Cura white magic abilities. The first version can be obtained as a first-time completion reward for the “Ramuh's Task 1“ side quest, while the second can be obtained by completing the “Ninja Village“ main quest during Chapter 1-3 of the "Crystal of Time" arc.

The first Unicorn signet provides Aemo with balanced increases for all her stats, bar her speed stat. Its Esuna abilities are helpful during that point of the game, being one of the few methods of removing status ailments at that point of the game. However, the signet’s ability is easily outclassed by Aemo’s Healing Harmony abilities from her second Siren signet and Jornee’s Heal-type white magic abilities.

The second Unicorn summon is useful the moment it becomes obtained, providing Aemo with a majority of improved stats, but still lacks a significant speed increase. The Cura abilities serve as the only means of group healing for a majority of the “Crystal of Time” arc until Jornee obtains the Aqua Maiden signet to teach her equivalent Healara abilities. The summon’s Spring of Heroism summon attack is an excellent means of buffing the entire party during boss encounters.

Due to both signets lacking passives, the Unicorn signets are easily replaceable when progressing through the “Crystal of Time” arc. However, the second signet is excellent for Mootie to equip for party healing and buffing for a majority of the game’s first arc.

The Unicorn is based on the recurring summon that first appeared in Final Fantasy VI, with the first variant even retaining the Healing Horn summon attack of the original.

Both signet artworks depict the Unicorn accompanied by a young maiden in a long white gown. These artworks reference the mythological legends that Unicorns can only be tamed by a pure maiden.

The first version of the Unicorn has access to the Healing Horn summon attack, which heals a moderate amount of HP to the entire party. In addition, it also removes poison, darkness, and silence.

The second Unicorn summon uses the Spring of Heroism shared summon attack, which buffs the attack, magic, and speed for all allies for 3 turns.

Summoning both versions of Unicorn require 2 bars from the Summon Gauge.

The following are the abilities Aemo can learn from the first Unicorn signet:

The following are the abilities Aemo can learn from the second Unicorn signet: 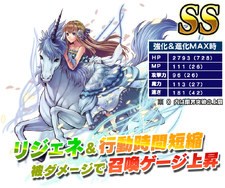 In the original free-to-play versions, the first version of the Unicorn was one of the many summons available at the initial launch of Final Fantasy Legends: Toki no Suishō. There were two versions of the Unicorn’s signet; a variant that taught Esuna abilities, and another variant that taught Dispel abilities. The Esuna variant could be obtained as a random treasure drop from the Atomos Gate battlefield and through the game’s summon draw shop, while the Dispel version could only be obtained through the draw shop. These versions of Unicorn were rank C signets.

The second Unicorn signet was originally a light-elemental god-tier signet available through the game’s summon draw shop. The signet was included in the draw shop during the game’s final months as Final Fantasy Legends: Toki no Suishō. In the free-to-play versions this signet was much stronger and allowed characters to perform Healing Horn I-III abilities, which granted continuous healing and soften damage. This version was a SS rank signet and required god stones to upgrade.

Both signets could be equipped by all characters. 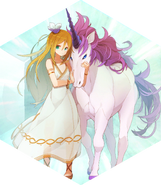 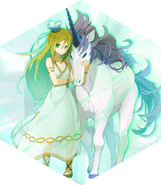 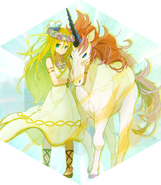 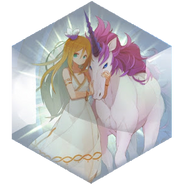 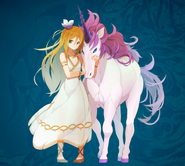 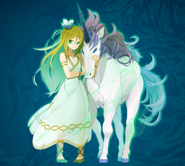 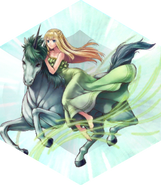 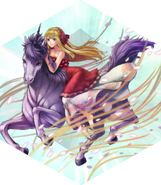 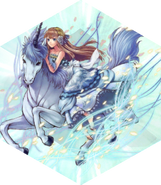 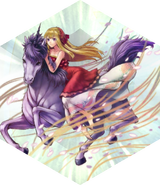 [view · edit · purge]The unicorn is a legendary animal from European folklore that resembles a white horse with a large, pointed, spiraling horn projecting from its forehead, and sometimes a goat's beard and cloven hooves.