Unei's Shrine, also known as Unne's Shrine, is a location in Final Fantasy III. It is located on a cave to the north of the bay where the Temple of Time is located. It is where Unei sleeps, marking her presence on the Dream World, which she was given power over.

By Doga's order, Warriors of the Light arrive here after obtaining Noah's Lute in the Temple of Time, in order to wake Unei from her eternal sleep. Upon doing so, Unei gives them the Fang of Fire and joins in the task to raise the airship Invincible from the Ancient Ruins, which is able to reach the Cave of Shadows. 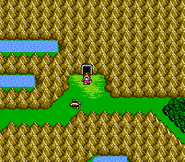