Ho ho ho! I told you I was the guardian of the world of dream, didn't I?

Unei, upon reminding Luneth of her visit to his dream.

Unei, (Eng. /'ʉ:neɪ/) also romanized as Unne, is a supporting character from Final Fantasy III. She is a magician with power over dreams. She can aid the party by using Holy or Haste at the start of a battle.

Unei is a short, elderly woman with an orange-brown hat, and a matching purse and shoes. She wears a white dress with brown markings at the bottom. Her Yoshitaka Amano artwork shows her leaning on a cane, with a parrot perched on one shoulder. The parrot is absent in the DS remake model, though the first dialogue after she wakes up implies that it remains in her shoulder.

Unei is a wise woman, witnessing everything that happens in the waking world while she was in the dream world. Despite Xande becoming her enemy, she tells party to save him, showing that she still sees him as a friend.

One of the great Magus Noah's students, Unei was given the power of the dream world. She has thus been kept in eternal sleep. Unei appears after the death of Aria, where she tells the Warriors of Light in their dreams to visit Doga. Later on, the Warriors of the Light wake her up with Noah's Lute.

Despite having been asleep, Unei was fully conscious in the dream world though unable to return to the Waking World due to time having stopped on the other side by Xande. She was forced to live in the dream world for a 1000 years while aware of the events happening in the Waking World. She leads the party to the Ancient Ruins and destroys the rocks blocking the party's path to claim the airship Invincible.

Unei tells the party that they must head to the Cave of Shadows to obtain the last fang needed to break Xande's Statues that prevent the party from accessing the Ancients' Maze. She leaves and joins Doga at his manor.

After the party obtains the Fang of Earth, the party finds Unei at Doga's Grotto, where the party fights the two apprentices of Noah. Unei dies, although her soul remains eternal. The party meets Unei and Doga a final time after they are defeated by the Cloud of Darkness in the Crystal Tower. Unei and Doga revive the fallen Warriors of Light, and her spirit finally moves on.

In the 3D remakes, Unei can aid the party in battles by either casting Haste on the whole party or Holy at a single enemy.

Unei is fought as a boss directly after Doga. She can cast Aeroga and Tornado on the party, as well as perform physical attacks, though the main concern is her spells, as she is a Devout.

Unei appears as a supporting non-playable character in "Chronicles of the New Era" storyline involving the Syrcus Tower. The enemies Unei's Clone(s) also appear in the tower.

Unei and Doga in front of the Crystal Tower.

Unei on the top floor of Syrcus Tower.

Unei is an ally and a summonable Legend. She is depicted in her Final Fantasy III default outfit. Her EX ability is Tornado. 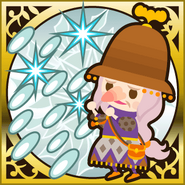 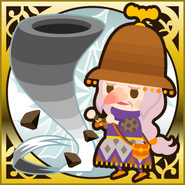 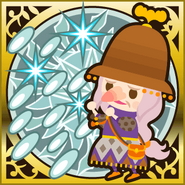 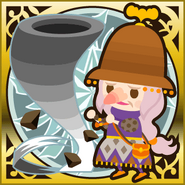 Final Fantasy IX has a message on the Bulletin Board in Mount Gulug from "Une the Mole". There is also an item called "Une's Mirror".

Final Fantasy Tactics has a quest in Zeltennia castle's tavern after the fight in Eagrose, the requester is called Unei.

One of the Mixes from the aborted Transmuter job in Final Fantasy Tactics A2: Grimoire of the Rift is named "Une's Wrath" (ウネの怒り, Une no Ikari?). 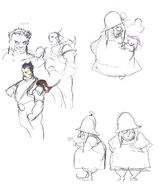 Amano sketches of Unei, along with an unknown character. 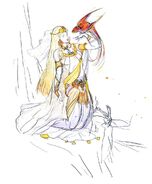 Unei in the Manga.

Young Unei in the manga, notably similar to the unused Amano artwork.

Though romanized differently, Unei's name is likely a reference to Dr. Unne from the original Final Fantasy, as both are written using the same kana (ウネ).