The Underground Waterway, also known as Watery Pass, is a cave in Final Fantasy IV and Final Fantasy IV: The After Years. It is a cave filled with water that connects Kaipo and Damcyan. There are two halves of the cave. The southern part contains an underground river, and the northern part contains an underground waterfall and lake. The exit to the lake is frequented by octopus-like monsters.

Cecil Harvey and Rydia pass through this cave to search for the Sand Pearl. Tellah also passes through this cave so he can reach Damcyan because his daughter, Anna, ran there with Edward Chris von Muir, who was disguised as a Bard. Tellah failed to defeat the Octomammoth at the end of the cave on his own, so he returned to the southern part of the cave.

Tellah meets up with Cecil and Rydia and they join forces to get through the cave. They take a stop at a Special Field, and Tellah uses his Tent to rest. That night, Tellah tells Cecil that Rydia reminds him of his daughter, Anna. They discuss their pasts and how Rydia, a Summoner of Mist, could improve her powers. At the end of the cave the three of them defeat the Octomammoth, granting passage to Damcyan.

Several years later, Palom and Porom explore the waterway as training for Palom's quest to become a sage. At the end of the falls the two defeat the Cooler Mammoth, and Porom realizes Palom only wished to come here to challenge the monster Tellah fought before. She lectures him on how sages ought to use their magic, and the two return to Mysidia.

When the Red Moon returns and a meteor impacts near Mt. Hobs, Edward, Harley and a trio of guards from Damcyan traverse the waterway via hidden passages that let them climb back up the falls. The five head to Kaipo to catch a ship to Baron, but Edward heads back alone to the Antlion's Den when Harley falls ill and needs a Sand Pearl to treat her fever. On his way back Edward is accosted by bandits and washes down the falls to surface at the bottom.

After Edward arrives at Baron and returns to Damcyan, Ceodore Harvey and the Hooded Man travel through the waterway to reach Damcyan after seeing the Red Wings flying towards the castle.

Located near the entrance, there is a descending staircase to the small lake area. There is a secret passage inside the big waterfall, and some treasures can be found inside.

At Underground Waterway B2 North, there are two secret passages, one after the long corridor on the left side of the entrance and the other one near the exit for Underground Lake N. Both pass through the wall and lead to the southeast side of the area where there is a treasure.

It is found in the Underground Lake's B1, the last floor of the twin underground dungeons. An Octomammoth blocks the rest of the passage, which is the exit that leads to Damcyan. The party must defeat the Octomammoth.

The background music that plays inside the Underground Waterway is the Final Fantasy IV generic "Dungeon" theme.

Cecil finds his beloved Rosa in Kaipo, only to learn she languishes with the deadly Desert Fever. He sets out for Damcyan to find a cure.

The series of tunnels on the world map (iOS).

The secret area behind the waterfall (SNES).

Underground Waterway on the world map in Final Fantasy IV: The After Years (Wii). 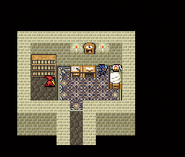