Everyone's favorite undead princess. Seems to maybe sort of have a history with Sherlotta? Hmmm... If she's a princess, shouldn't she have a kingdom? But let's not go there... It's a dead end.

Undead Princess is a minor character in World of Final Fantasy.

Age in Grymoire: Immeasurable
(She's been alive—er, undead—for quite a while, but Sherlotta's still older)

Notes: Dead, but has a great hex life / Down-to-earth when she drops the spooky act / Not especially princess-like

Not the Undead You Expected?
Who were you hoping for, Lich? Oh, sure, he's been the death of the FF party since the series' beginnings—but sorry, you won't get a chance to put him back in the ground on this adventure. Still, you might have heard his name come up in conversation, right? That means he's in Grymoire somewhere.

Hey, Wait a Second...
You may be wondering why so many characters from the CRYSTAL CHRONICLES series have been popping up in Grymoire. Well, take a look at the person doing character design, and you may have your answer.

All quotes are uttered while outside Sherlotta's Solace.

Lodgings! We've got your lodgings! Shake off the cold at m'lady Sherlotta's Solace!

Come one, come all!

Heidy ho. What can I do for you?

Ohhh... You want a real scare.
Buuut, I don't feel like wearing out my face muscles, and the animators didn't feel like going the extra mile, so why don't we just leave it at "next time," okay? Okay! Back to work. Byyye!

When asked to make a funny face

You dare challenge me? I'll teach you the meaning of fear...
No hard feelings...when you're dead!

When challenged to a fight 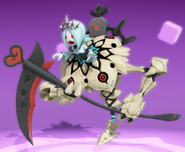