Start a Wiki
watch 09:05
World of Final Fantasy: Undead Princess Boss Fight
Do you like this video? 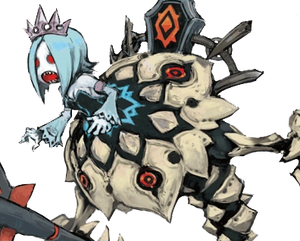 I am the Spirit of the Holy Staff. May the world be at peace... Wh-what do you think? Exciting, eh?

The Undead Princess (アンデッドセレブ, Andeddo Serebu?, lit. Undead Celeb) is a character in Final Fantasy Crystal Chronicles: Echoes of Time. She is a temperamental and shrill shade whose true race is unknown. Her real name isn't mentioned in the game, but in the official strategy guild she is named as Celeb. After being bullied by Sherlotta, the spirit resorts to calling her "m'lady".

The Undead Princess is a specter of an unknown race sealed away by the ancient people to guard an object that could harness the Crystal power. Before her entrapment, she knew Larkeicus, who told her that she was created to stop anyone in the future who would interfere with his plans.

When the Hero and Sherlotta venture to the Graveyard to find the artifact, they disturb the Undead Princess' coffin. Her 800-year-old spirit, resting in a bracelet-like device, awakens and attacks the party. Upon her defeat, she withdraws into the artifact, and after many threats from Sherlotta, tells them that there is another component that they need to complete the Crystal-sensitive item.

She tells them that the other component is a staff hidden in a Mine, and although having no idea where the mine lies, hastily tells an impatient Sherlotta that the Hero should look in the Library to find data leading to the Mine's location. Sherlotta then carries the bracelet around with her, periodically reminding the Undead Princess that she could be snuffed out at any moment.

When the Hero retrieves the staff from the Mine, Sherlotta connects the two pieces and uses the newly formed key to open the Gate. The Undead Princess is then left in front of the Gate to ponder her existential crisis while the Hero and Sherlotta carry on with their journey.

After the Hero beats the game, they can go back to the Undead Princess, who is still stuck in front of the Gate. When she sees the Hero become sad after mention of "M'lady", she asks what she can do to cheer him/her up. She can either 'Make the Tower Reappear' or 'Do a Trick'. If they pick the 'trick' the Undead Princess changes her face to look more pleasant and then talks. Picking the 'Tower' one will make the Tower and Bridge reappear.

The Undead Princess is the final enemy of the Graveyard. 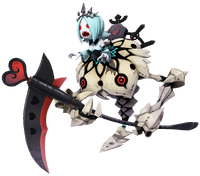 Undead Princess is first encountered by Sherlotta and Refia in the Intervention quest, "Never Cross the Boss". She can later be imprismed (as Undead Princess★).

The Deathskull Mirage can also be transfigured into a different version of Undead Princess using a Memento.