The undead (アンデッド, Andeddo?), also called the living dead or zombies, is a recurring type of enemy from the Final Fantasy series. Undead enemies vary in appearance, abilities and strength, but share a few key characteristics: they resist Dark and Poison spells, but are vulnerable to healing magic, Fire and Holy.

They are immune to HP draining attacks (and some, perhaps all, are immune to MP drain), often employing such attacks themselves, and are often able to infect party members with debilitating status ailments. In most games, as they are vulnerable to healing spells and items, Undead can be killed simply by throwing a Phoenix Down at them, or by casting a Raise spell.

Recurring classes of undead creatures include ghosts, skeletons, mummies, vampires and liches, all of which change forms and have different variations throughout each game.

Undead enemies appear in many locations and areas in the world map. Easy damage is inflicted with Dia, a spell specifically for the White Mage job class. The Black Mage's Fire spells are also very useful.

The enemies in the Shadow family are cloaked skeletons that often appear in large groups and are very fragile. The Shadow and Wraith are very weak enemies, and the Specter and Ghost are like glass cannons: they hit multiple times for large damage, but can be felled quite easily.

Skeletons also appear in large hordes, but are similarly susceptible to weak Fire or Holy-based attacks. Other enemies in this group are the Skuldier, Bloodbones and the Dawn of Souls exclusive Bonesnatch, which is marginally more powerful.

Enemies of the Zombie genus include the Ghoul, Ghast, Wight and Revenant. They share the common trait of being able to inflict Paralysis with their physical strikes.

The Vampire is a boss in the Cavern of Earth, and its stronger counterpart, the Vampire Lord, inhabits the Flying Fortress and the Chaos Shrine. Both are far more durable than other undead enemies.

Mummies are also present, but do not have any special abilities or characteristics. The King Mummy is just as weak as its common counterpart, but the Pharaoh has a large sum of HP and can often be found guarding treasure chests. All of these can inflict Sleep with their melee attacks.

Undead enemies appear and almost all of them are weak against Fire, resistant to the Poison and Matter elements, and absorb Death (converting it into a Cure effect of equivalent level). The Blood Sword, Drain, and Osmose have their effects reversed, deducting the attacker's HP or MP and giving it to the undead enemy.

Undead enemies can be harmed with Cure spells or instantly killed with Life for the first time. They are also the only enemies that suffer damage when the Garlic item is used. The Sun Blade inflicts extra damage to undead.

Undead monsters can be found in the Sealed Cave, the Mythril Mines in Kazus, and Castle Hein.

The majority of the undead are found in Mount Ordeals, but many can be found throughout dungeons and caves across the world such as Mt. Hobs and Cave of Eblan.

Undead are common enemies in the Ship Graveyard, but they also inhabit the Great Sea Trench. Siren can turn undead at will.

Some instant death effects restore undead enemies, as well as Zombie/Undead party members, to full health, whereas others work.

The following abilities kill the undead unless they have immunity to Death:

The following abilities kill the undead even if they have immunity to Death (but fail against Heavy):

The following abilities restore the undead to full health:

The Requiem song deals massive damage to the undead, but ignores all other opponents.

Undead are mainly found in the Phantom Forest and Darill's Tomb among other areas. Most Death attacks (excluding things that cut the enemy apart, like the Zantetsuken, or effects that remove the enemy out of the battle, like Banish or Snare) will allow the undead opponent to fully replenish the target's HP.

Playable characters can be made undead by equipping the Lich Ring. This will make Death effects and the Poison element heal the character, while Cure and Raise spells will harm them. The Healing Rod will heal undeads targets. It also makes the playable characters unable to be revived when they are knocked out. Undead status expires at the end of combat and has no effect outside of battle, so characters wearing Lich Rings can be healed and revived outside of combat without needing to unequip them first. Gau can also be made undead by performing the Rage of any of the enemies listed below. Unlike with the Lich Ring, Gau's Undead status wears off along with the Rage when he is KO'd, so he can still be revived with the Raise or Arise spells afterwards.

The temporary ghost party members from the Phantom Train also have permanent undead status due to their unremovable Lich Rings. 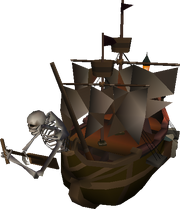 There is no classification for undead, however those that are weak to Holy and absorb Restorative (and thus take damage) are considered to be undead enemies. A number of these undead enemies are also healed by the attacks that attempt to inflict instant death. Their aversion for Restorative means that Phoenix Down items will defeat them instantly, and they gain myriad status ailments from White Wind, oftentimes petrifying outright.

Undead enemies are encountered in the Cave of the Gi, including the boss Gi Nattak. They were created when the vengeful souls of the Gi could not pass into the Lifestream.

The Ghost enemy's affinity with Holy is Death, which means that any attack of the Holy element will defeat it instantly. Despite this, by the time the player has means of inflicting the element they are no longer available to fight.

Enemies who are damaged by Restorative, weak to Holy, and absorb Death:

Enemies who are damaged by Restorative and weak to Holy:

Though not a class on its own in Enemy Intel, some enemies are hurt by healing spells and items, Elixir and

Raise being easy ways to deal 9999 damage to them.

Using Soul Drain against enemies who are damaged by healing magic/restoratives will have a reverse effect, and instead will drain Aerith's MP.

Undead creatures appear sparingly in dungeons, fields and as bosses. They are damaged by curative abilities, instantly killed by reviving abilities, take half damage from physical attacks, and resist the Doom and instant death attacks, including Death and Selphie's Limit Break, The End.

Undead class includes all zombie type enemies. One of them is a boss, the Soulcage. Undead take damage from curatives and can be instantly killed by revival spells and Elixirs; Phoenix Downs and Phoenix Pinions leave the undead with 0–9 HP (thus killing it with a 10% chance). Potions and Hi-Potions damage the undead and Ethers damage their MP, but jewels still heal them.

Undead Killer makes the equipper's normal attacks deal x1.5 damage to undead enemies. Using Blood Sword, Drain, or Osmose on undead targets damages the caster and heals the target. The Zombie status effect makes afflicted party members undead (but will not make attacking them with Undead Killer deal more damage), meaning they cannot be revived via anything but Auto-Life. Death fails against the undead, restoring them to full health instead, but all other instant death moves will work.

While there is only one undead creature, there is a skill that can give Zombie status and there is also an undead boss.

It should be noted that undead is not a classification in and of itself; rather, the enemies considered "undead" simply have permanent Zombie status.

Undead are a genus in opposition to Arcana. They are characterized by immunity to drain/aspir/absorb spells, tendency to menace travelers at night and a habit of attacking players when they are at low health.

They encompass the following families:

Skeleton and its variant, Skeleton Ω, appear, but they do not exist as a undead enemy type.

Daemons are monsters that appear at night and in dark places, like caves and ruins. They deplete maximum HP and are weak to Holy, but not weak to curatives. Daemons are otherworldly in appearance, modeled after recurring monsters like Tonberries and Iron Giants. They take damage from sunlight if the battle draws until daylight hours.

Undead creatures have a chance of reviving 3 turns after they are KO'd. The Monk's Chakra skill will restore HP and MP to the undead.

In addition, there are several undead generic units that appear specifically in story related battles. They all have innate Beastmaster ability along with innate status of Undead and Float (except for the Undead Knight). These units also all have status immunity to Traitor, Blind, Vampire, Reraise, Invisible, Poison, Regen, Charm, and Doom.

Undead creatures will revive three turns after they are KO'd. However, several abilities are introduced that defeat the undead permanently, such as the Archer's Burial skill.

Undead monsters turn into tombstones when their HP reaches 0, and will be raised when three full turns have passed. They can be permanently removed from the field by either skills such as Burial or Exorcise (which have a low chance of working on an active undead, but 100% hit rate when the undead is in a tombstone form or under some status ailments).

Also by using a Phoenix Down or casting Raise (or most other revival skills, such as Phoenix) on the tombstone. Throwing a Phoenix Down only defeats the enemy if it is a tombstone, as when the undead is still on the field, it deals slightly less damage than a Hi-Potion. Undead can be removed from the battlefield without such holy banishment, such as by the Alchemist's Transmute ability.

Undead is an entire class of enemies.

Attacking with the Cure spell is highly effective against the undead, the spell deals zombie-elemental damage against them.

Undead is one of four monster types, the Sun will inflict critical-hits against them.

There are three types of undead monsters, the ghost-type, skeleton-type, and zombie-type. Undead monsters reverse absorption.

Undead enemies are very typical and are vulnerable to healing spells. However, draining spells and abilities such as Drain, Osmose when cast on them will heal themselves and damage the casters instead. This also means that the Blood Lance, one of the best weapons, is useless against Undead.

Healing damages Undead Mirages only on the enemy side. If an Undead enemy is stacked with a regular one, the Undead status is negated and is healed by healing items and spells instead. Undead Mirages:

The term undead describes beings in mythology, legend or fiction that are deceased yet behave as if alive.