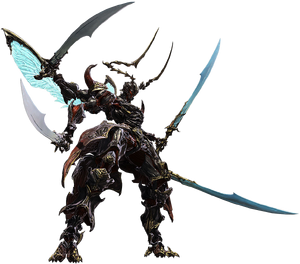 It was composed by Masayoshi Soken and arranged by Yoshitaka Suzuki and Soken. The lyrics were written by Michael-Christopher Koji Fox and the vocals were provided by Dan Inoue.

It is the 21st track in Heavensward: Final Fantasy XIV Original Soundtrack.

The lyrics are from the official soundtrack.[1]

During the first time Ravana uses his ability rotation after casting Bloody Fuller, his attacks are timed to go off at the same time as their respective lyrics: he casts The Rose of Conviction, The Rose of Hatred, and the Rose of Conquest. This is not a typo; the singer's voice is clearly saying "the rose of conquest", but the official lyric, confusingly, is "the rose of contest".

English
High, on high I stand
Gazing down to see
The endless garden
Awaiting me

And the war, it wageth on
The storm, it rageth on
The bold ever fight on
Their lives echoed in song

Fall, like snow they fall
Petals plucked and strewn
Yet from their seeds grow
This war anew

The war, still wageth on
The storm, still rageth on
The bold blindly march on
Their lives, lost in a song

"Unbending Steel" was performed by the Primals in a live concert.

A band arrangement of "Unbending Steel" is performed by the Primals which appears in this album.

An arrangement of "Unbending Steel" appears in the Primals' debut album.

During the development of Heavensward there were plans for "Unbending Steel" to have Gnathic or Dragonspeak lyrics before ultimately settling on English. Portions of these lyrics were shown during a panel at PAX Prime in 2015,[2] though they only corresponded to the first three verses of the song's English lyrics.