The Oracle's canine companions Pryna and Umbra—female and male, respectively—serve as delivery dogs, relaying messages between Lunafreya and Noctis. Although they manifest themselves as a pair of white and black pups, they are in actuality Messengers boasting mystical powers of their own.

Umbra is a dog who appears in Final Fantasy XV and Brotherhood Final Fantasy XV. He is described as a "faithful servant" and belongs to Lunafreya Nox Fleuret. Though manifesting as a black spitz-type dog, Umbra and his white sister Pryna are Messengers of the Astrals to the Oracle. Umbra delivers messages between Lunafreya and her childhood friend Prince Noctis by carrying the Lovers' Notebook between them.

Divine Messenger who assumes the form of a black male dog. One of Lunafreya's supernatural pet pups, Umbra possesses the power to transcend space-time. He uses this ability to fulfill his Messenger calling, carrying a notebook back and forth between his owner and her beloved Noctis as part of a tradition the two began as children.

Being one of the Oracle's twenty-four Messengers has its perks, circumventing time-space notwithstanding.

Umbra is a dark-colored dog that could be a cross between a Shiba Inu and an Alaskan Malamute. He has yellow eyes. When a puppy in Brotherhood Final Fantasy XV, he had black fur with white streaks across his muzzle and portions of his body, while in Final Fantasy XV he appears more dark brown and beige. He wears a green rope around his neck and front legs that allows him to carry messages between Prince Noctis and Princess Lunafreya. He also has a green bandage around his left front paw.

As a Messenger, Umbra is a magical creature. His profile in Final Fantasy XV: Comrades describes him as a divine Messenger who "assumes the form of a dog". He can cross the world to deliver the message he carries.

The dogs are characterized somewhat differently in Brotherhood than in the rest of the Final Fantasy XV Universe.[note 1] In the former, they appear more like real animals, whereas in the Omen and in Final Fantasy XV their appearances are frequently accompanied by mystical phenomena. Whereas Umbra is associated with a corporeal presence, delivering physical messages between Noctis and Lunafreya and literally transporting the player to return to past areas of the game, Pryna is associated with dreams and visions. In this sense, Pryna and Umbra could be likened to yin and yang from Chinese philosophy, where yang is the positive/active/male principle in nature, also representing the sun, openness and "belonging to this world". Yang is represented by the color white, but the light/dark dualism is inverted in Final Fantasy XV, also seen with the colors of the Crystal, Lucis, Tenebrae and the Niflheim Empire. The yin and yang symbolism extends to Lunafreya and Noctis, Pryna being more associated with the former, whereas Umbra is most often seen interacting with Noctis.

As depicted in Brotherhood Final Fantasy XV, Umbra awakens from a nap while in the care of Lunafreya Nox Fleuret. He runs outside, alerting Lunafreya to the return of Pryna, a white puppy whom she had sent to see Noctis.

Umbra acts as an intermediate between Noctis and Lunafreya, who write to each other in the small leather journal kept around the dog's neck. Umbra meets Noctis at Longwythe Rest Area after Noctis has the Regalia repaired, at Wiz Chocobo Post after the party loses their car, and at Cape Caem as Noctis is about to set off to Altissia.

Umbra, being so emotionally tied to the party, allows them to "relive" their adventures from the past after Noctis and his friends leave Lucis. At the Leville in Altissia, Noctis meets Gentiana who explains Umbra's powers that can send them back in time to the Lucis or, later, Altissia of the past. Umbra, at this point, resides in a small soldier's dormitory in the city of Insomnia. When Lunafreya dies, Umbra gives Noctis her final message.

Umbra stands with Gentiana and members of the Kingsglaive against the darkness awaiting Noctis's return.

After Noctis awakens from his ten-year sleep inside the Crystal, he is met by Umbra in Angelgard, who delivers a message from his friends to meet them at Hammerhead. Umbra stays by Noctis's side as he discovers the world trapped in perpetual darkness and daemons roaming the land. As they cross Leide together, Umbra alerts Noctis to an approaching truck, and they meet Talcott Hester who takes Noctis to Hammerhead. Umbra stays behind at the garage when Noctis reunites with his friends and they head for Insomnia to restore the light to the world.

Umbra awakes on the steps of the Citadel when the sun rises.

In Final Fantasy XV -The Dawn of the Future-, Umbra continues to aid Lunafreya after she has been revived by Bahamut shortly before Noctis awakens from his ten-year sleep inside the Crystal. He refuses to deliver Lunafreya's message to Noctis right away, but communicates his willingness to take the entire diary depicting her travels through the world of ruin when the time is right.

He aids Lunafreya even after she has been so infected by the Starscourge she turns into a daemon. Umbra finally delivers Lunafreya's diary to Noctis, who awakens in Angelgard, and stays by his side until they arrive in Galdin Quay. Umbra disappears once Noctis meets Sol there.

The player can select what type of message to send to Luna via Umbra, ranging from friendly, deep, and gruff messages. Depending on the player's choices, the key item description for the Lovers' Notebook changes.

Starting at Chapter 10, Final Fantasy XV leaves the open world structure behind for a more linear progression toward the end of the story. At rest points, Umbra provides the option to return to Lucis and Altissia by revisiting memories of them, thereby retaining the open world gameplay. The player can continue engaging in sidequests, hunts, and any other activities, before returning to the present by calling on Umbra again. Since the player is revisiting the memories of Lucis and Altissia, if they travel back in Chapters 14 and 15, the four will regress to their appearance ten years ago.

The player can get an Umbra Sticker

for the party's car by trading three Caem Carrots at Cape Caem Farm. In Final Fantasy XV: Comrades, the player can customize their avatar with an Umbra plushie.

Whenever Noctis and Pryna's visages reflect off surfaces, they appear as Lunafreya and Umbra, respectively. When Noctis and Pryna rush into a mirror, Umbra appears as Pryna's reflection on it.

Umbra appears briefly in a cinematic trailer for the game Assassin's Creed Origins. The trailer was animated by Digic Pictures who also animated Omen, a Final Fantasy XV trailer, which features an Assassin's Creed reference.

Umbra was designed by Roberto Ferrari. Ferrari had designed characters that were cut from the final game, ninja-type characters similar to those who appear in Kingsglaive: Final Fantasy XV, but more Japanese. Umbra the dog was supposed to turn into one of them.[1] The dossiers in the final game say that Umbra and Pryna are Messengers who choose to appear as dogs, perhaps alluding to this early concept.

In July 2017, Square Enix displayed previously unseen concepts from early development at a fan event. These images have not been been published outside of photos fans themselves posted from the event, and among them are pictures of a silver-haired and yellow-eyed man with markings on his face that many fans assume is the human version of Umbra due to their numerous similarities.

Before the game was released, developers demoed Lestallum via a "dog cam", exploring the town as Umbra.

Umbra and Pryna appear with angel wings on an illustration on a Cosmogony book the young Noctis had in Tenebrae, which depicts Messengers with the Founder King.

Concept artwork of young Noctis and Luna with Umbra and Pryna. 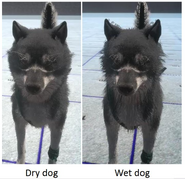 Umbra with a malboro by Chihiro Hashi for a release date countdown in social media. 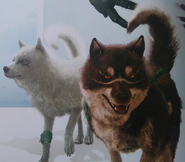 Pryna and Umbra renders in The Art & Design of Final Fantasy XV. 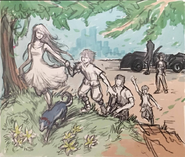 Umbra traveling with Luna and Pryna in the Girls' Day 2018 key art.

[view · edit · purge]Umbra means "shadow" in Latin. Umbra and Pryna may allude to Geri and Freki from Norse mythology, two wolves that accompany the god Odin that are sometimes depicted as being light and dark-colored.

Umbra's counterpart is Pryna. Though Pryna's name doesn't mean "light" in juxtaposition to Umbra's name meaning shadow, she could be seen as representing it for her white color.

When Lunafreya dies Pryna is said to have died alongside her, while Umbra stays in the mortal world. This could allude to light disappearing from the world and leaving only shadow, as without Lunafreya Starscourge will overwhelm Eos. The dogs could also be seen as also embodying the yin and yang duality from Chinese philosophy, Umbra and his more corporeal presence representing yang. When the sun rises, Umbra is the only dog seen greeting the breaking dawn.