His favorite club (made from Behemoth bone)[1]

A yeti with a love for bone carvings. Stronger than a gigas... but a bit unruly.

Umaro is a playable character in Final Fantasy VI. He is a yeti who lives deep in the Narshe Mines, and his only friends are the moogles who also live in the mines. He is an optional character who can be recruited in the World of Ruin. Mog must be in your party to recruit him.

Umaro is a large yeti covered in fur but for his hands, feet, and face. The color of his skin and fur have varied between white, blue, and purple in different appearances and artworks.

In the mobile and Steam versions, Umaro has a unique Tent sprite

Umaro is capable of limited speech, but mostly communicates in grunts and groans. He is able to craft and use crude weapons and armor, and his cave is decorated by a bone carving and what seems to be a makeshift carpet.

Umaro obeys the orders of Mog after Mog asserts himself as Umaro's "boss", and he has a deep loyalty to Mog and the party by proxy. According to Hironobu Sakaguchi, Umaro has a strong sense of honor and feels like he owes a debt to Mog, because Mog shared some food with him when he had collapsed from exhaustion.[4]

Umaro is terrifically strong. His footsteps shake the earth and he can smash through a wall in Kefka's Tower to clear a path for the party to escape. He throws himself and allies at enemies at great speeds, and can conjure a magical snowstorm with the proper relic (Blizzard Orb) equipped. For this reason Umaro is associated with the ice element in spin-off titles. When faced as a boss Umaro has a curious reaction to Green Cherries, and eating one causes him to gain numerous stat buffs and enables stronger attacks. As a party member Green Cherries have no more effect on Umaro than they do on any other character.

In the World of Balance, Umaro can be seen watching the events in Narshe from a hole in his lair that looks out over the town, but he often retreats and hides when people draw near. At least one resident of Narshe is aware of Umaro when they saw him in the mines with the moogles.

After the party thaws Valigarmanda in the World of Ruin, a part of the cliff collapses, revealing an opening into the Yeti's Cave below. They leap down and explore the cave, and discover Umaro's home. They approach a bone carving on display and notice the magicite Midgardsormr in it, and remove it. Umaro seems to sense this and grows enraged and attacks them. The party subdues Umaro and Mog orders him to join them. Umaro agrees and goes to wait on the party's airship, the Falcon.

When the party is escaping Kefka's Tower after Kefka's defeat, Celes and Edgar come against a door that will not open, seemingly trapping them. Umaro begins to grunt loudly and throws himself into the wall repeatedly, breaking it down and allowing the two to flee into an adjacent hallway and door. Umaro makes it back to the Falcon and escapes the tower's collapse with the rest of the party.

Umaro is recruitable as a playable character after being fought as a boss. He is a Berserker who cannot be given commands, but has high physical stats. He has four attacks he uses randomly. While he can be potentially strong, the inability to select his commands makes him unreliable.

The restrictions on physical attacks in the Cultists' Tower do not apply to Umaro, and his permanent armor, the Snow Muffler, restores HP when he is hit with an Ice type spell. Most enemies in the tower have abysmal physical defense, and thus Umaro can prove a huge asset. He may also be useful in the Dragon's Neck Coliseum where everyone's actions are random and all of Umaro's actions are offensive and powerful at that.

Umaro can act during Cyan's Bushido techniques, while most party members cannot.

Umaro's theme is named after him, and is the theme played in his cave. It is mixed into the ending.

Umaro has appeared in the following games throughout the Final Fantasy series:

In Secret of Evermore, Umaro appears among the crowd of spectators that includes other Final Fantasy VI characters at the gladiator battle of Antiqua. He appears alongside Terra, Locke, Mog, Relm, and Strago.

Umaro was originally supposed to be a random encounter on the world map and could only be caught using bait, much like Gau in the final game.[5]

Hidden game data suggests Umaro was at some point intended to be able to be encountered in the World of Balance, as an unused battle complete with stats and a simple AI script exists within the game's data. The Yeti's Cave also has an event trigger that creates a cave entrance on the world map in the World of Balance north of Narshe; the cave that appears has no entrance data assigned to it and the Yeti's Cave itself has data for an exit to the overworld, but this trigger may have been intended to be such. Umaro has a placement on the Blackjack, but it can only be seen by hacking Umaro into the party or by using the airship glitch. He uses the same line as the one when he is inside the Falcon.

Umaro has a proper animation for casting magic, but it is not used in battle; when he uses his Snowstorm attack, he assumes a normal "ready" stance. It is possible to view one frame of the animation in the field if Umaro is the party leader when picking up a magicite shard.

In the data, Umaro is the last listed playable character in the game. This was done as a shortcut by the developers. Numerous game scripts and events that would have an effect on multiple characters do so by affecting all characters within a specified range. As Umaro is the last character, events that affect all party members except him, such as the NPC aboard the airship that removes equipped items from characters not in the party, exclude him by setting their specified range one digit lower, thus encompassing the twelve core party members and Gogo. 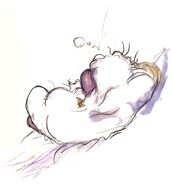 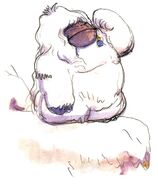 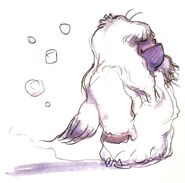 The name is also similar to umano, Italian for "human".