Ultros (オルトロス, Orutorosu?), also known as Orthros, is a recurring enemy in the Final Fantasy series. Ultros is a carnivorous purple octopus with a writhing mass of tentacles and has many fangs. He frequently cracks corny jokes and makes lecherous comments towards female party members. Ultros works with his partner Typhon, who provides the muscle Ultros lacks. Ultros first appeared in Final Fantasy VI as an incompetent but recurring boss, and has since been featured in several other games as an optional encounter.

Since Final Fantasy XIII-2, Ultros is voiced by Masaya Onosaka in Japanese.[1]

Ultros is a large purple octopus with red eyes and a mass of tentacles that usually appear to be coming from his mouth below a row of sharp fangs, but his lower mouth is never seen. Ultros is not always depicted with eight tentacles, as real-life octopuses have, and is sometimes pink instead of purple. He has spots on his body in some appearances, and in Final Fantasy XIII-2 has white markings. While his exact size varies, Ultros is usually larger than the party. His trademark attacks are Tentacle and Octopus Ink.

Ultros rarely, if ever, bears proper reason for his antagonism, and is often regarded as a bizarre nuisance who just likes causing trouble, rather than being truly evil. He adores females but hates males, and when fought often comments on how attractive the females are and how repulsive the "muscle head" males are. Ultros relies on his partner "Mr. Typhon" for assistance, as Typhon is much more powerful and durable.

Uwee hee hee! What have we here? I'm warning you, I'm armed... Eight-armed, that is! Uwee hee hee!

Orthros appears as a boss in the Soul of Chaos dungeon, at Whisperwind Cove. Orthros retains his sense of humor and his ink attack to blind the party. However, his trademark attack, Tentacle, is absent. Defeating him earns the party the Rune Staff.

Main article: Orthros (The After Years)

Orthros is one of four bosses from Final Fantasy VI that the party can fight on the True Moon. He uses a variation of his battle patterns from the third battle in Final Fantasy VI, and will speak to the party as they fight, commenting on how cute the females are and berating the men as "muscle men". After the fight the party is confused by the encounter, but Rydia remarks he did not seem like a bad person, if somewhat strange.

"Dancing Calcabrina" plays during the first phase of the fight with Orthros, switching to the usual boss theme in the second phase.

In the 3D versions, Orthros is excised.

Ultros makes his debut as a recurring boss and minor character with a similar role to Gilgamesh in Final Fantasy V. Ultros appears in four different boss battles and is relatively easy to defeat. His primary role is as comic relief, as he is not tied to any faction within the world.

Orthros is a Rank V Elite Mark fought in the Southern Sluiceway of the Garamsythe Waterway. Being a lecher, Orthros only appears when the party is made up of three female characters (but afterwards male characters can be switched in, and guests—Larsa and Reddas—won't prevent his appearance). Like his Final Fantasy VI incarnation, Orthros is a thief. This time he is a Flan-like enemy rather than an octopus. The picture on his bill shows him in the same pose as his sprite in Final Fantasy VI.

A fighter group in the Battle above Rabanastre is also called "Orthros".

What a pretty little girl! I do like 'em pretty! But look at this boy, he's even prettier!

Ultros upon seeing Serah and Noel

Ultros appears as downloadable content in the Coliseum, referred to by the Arbiter of Time as Ultros the Uninvited due to the octopus coming to the Coliseum uninvited and the Arbiter wanting him gone by any means. As the battle begins, Ultros flirts with Serah Farron while screwing with Noel Kreiss's head prior to calling Typhon to lend him a helping hand.

After Typhon is defeated, Ultros tries to escape, but Serah pins his tentacles to the ground with arrows as she and Noel combine their fire spells to fry Ultros and knock him unconscious. Upon defeat, he can be recruited into the Paradigm Pack as a Synergist as a reward for a perfect Cinematic Action.

Ultros, using a modified version of his Final Fantasy XIII-2 model, appears in the Hildibrand Manderville sidequests for patch 2.4 as an receptionist for Dour Meadow at Master Fygreis's Coliseum. While attempting to sabotage the competitors and attempting at ask Gilgamesh to help before later being attacked by Godbert Manderville, Ultros is revealed to be helping Avila with Typhon. Once the deception of Avila's Tempest Blade is exposed, Ultros convinces Dour to let him and Typhon fight the adventurer in the Dragon's Neck arena. After losing, Ultros is present at the award ceremony before he and Gilgamesh are sent flying by Typhon's wind. Ultros and Typhon are described as being Voidsent summoned by the Thaumaturge Guild's experiments.

Ultros also made a guest appearance in 2017 Moonfire Faire, where he appears in the event FATE "The Summer of Ultros." Adventurers must subdue him before he can harass any of the beachgoers. Upon defeat, he promises he'll be good and spends a few in-game hours leering at beach girls from a distance before returning to the sea.

Players can also obtain a "Wind-Up Ultros" minion as a random treasure from the Dragon's Neck trial.

Ultros is cooked.
Add a photo to this gallery

Ultros appears as the primary element of the trap used to eliminate the loyal Kingsglaive who attempt to rescue Lunafreya after she is kidnapped by General Glauca on the eve of the armistice treaty. The operation is revealed to be nothing more than a distraction to prevent any threats from Niflheim's true objective which is to abduct Lucis' crystal and the Ring of the Lucii. Ultros dies when it falls and is impaled on the spire of a skyscraper and subsequently crushed by a falling airship.

Ultros appears in the bedtime story Regis tells his young son Noctis as the thief of a magic crystal as well as the game's final boss.

Text box portrait.
Add a photo to this gallery

Orthros makes another appearance as a flan-type enemy, at the top of Brightmoon Tor during the second ascent. He is level 99 and possesses several devastating attacks, including the Gold Hourglass, a move which targets everyone on the player's team for both massive damage and Slow.

Ultros appeared as a recruitable character and boss.

Ultros in battle.
Add a photo to this gallery

An octopus-like monster. He often hires "Mr.Typhon" to help out with his exploits.

Ultros appears as a summon. When summoned, his Final Fantasy VI artwork appears and he uses Octopus Ink, spewing ink across both players' Bravery points, making their Bravery points a mystery. Ultros's summonstone is obtained as a level bonus in Destiny Odyssey III.

Ultros is also a ghost card that can be fought. The Ultros card is Level 100 Terra, and has the Red Gem and Delicious Fish accessories to be won via battlegen. The quote on the card is what Ultros says to Terra during the party's first battle with him in Final Fantasy VI.

I don't know all the details. I'm just a summon in this title!

Ultros makes a cameo in the in-game manuals, explaining accessories with Relm and Typhon. Ultros returns as a summonstone, with the same function as in Dissidia. He can be purchased from certain Moogle Shops for 20 KP.

Though his name has at times been mixed up with that of a certain two-headed dog of legend, Ultros is quite definitely just an octopus with no sense of propriety and an eye for women. He is quite strong, though.

Ultros is a boss, appearing mainly when playing "The Decisive Battle".

Ultros appears as a boss inside the Opera House and the Passage of the Eidolons.

Many have come to question the nature of this octopus's relationship to Typhon.

Ultros appears as an enemy encountered on the South Figaro Sea. He uses Tentacle and drops the Lilith Rod.

Orthros appears as a boss and makes several appearances in the Final Fantasy VI Realm, twice by himself and once alongside Typhon. In all cases, he is weak against fire and lightning. He became a Rank 4 Summon ability by way of fan vote for the global game's first anniversary. His attack, Tentacles, deals eight hits to enemy targets with a chance of inflicting Blind. 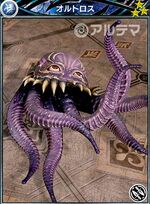 Both Ultros and Typhon appear reusing models from their appearance in Final Fantasy XIII-2.

Ultros appears in World of Final Fantasy as an enemy Mirage.

Ultros appears in Chocobo no Fushigi na Dungeon and Chocobo's Dungeon 2 as a boss. He attacks mainly by using Drain on Chocobo and Shirma. His head and two tentacles appear as separate targets with their own ATB gauges. Ultros remains in a lake for the duration of the fight, requiring Chocobo to use magic unless he is near the shore.

Ultros from the series along with Typhon from Final Fantasy XIV appear on Triple Triad cards in the version available via the Final Fantasy Portal App.

Artwork from the Dawn of Souls release of Final Fantasy.

[view · edit · purge]In Greek mythology, Orthrus or Orthus was, according to the mythographer Apollodorus, a two-headed dog who guarded Geryon's cattle and was killed by Heracles. He was the offspring of the monsters Echidna and Typhon, and the brother of Cerberus, who was also a multi-headed guard dog.

The Orthros of Final Fantasy has no connection with the mythical Orthros, save for their link to Typhon, which in the Greek myth was the father of Orthros and Cerberus. The likely reason Orthros is an octopus is given in the book for Final Fantasy Origins: Final Fantasy VI. An octopus was the main character in the first game Square ever made, in addition to the fact that in the production of Final Fantasy VI, a programmer told character illustrator Yoshitaka Amano and producer Hironobu Sakaguchi that the octopus they were designing reminded him of a purple octopus toy he had as a child named Orthros.Lua error in Module:Cite at line 56: Could not find an entry in Module:Codename/data or Module:Sources matching this input. The Orthrus spelling is also the name of a genus of jumping spider, another eight-limbed creature.

Though his name has at times been mixed up with that of a certain two-headed dog of legend, Ultros is quite definitely just an octopus with no sense of propriety for women. He is quite strong, though.