Ultimecia's design is unchanged from her original appearance in Final Fantasy VIII.

She dons a revealing red gown with a plunging neckline tapered just below the navel. A black fur ruffle extends along the neckline and merges with her wings. Her feet and hands bear violet talons and she has long silver hair, some of which is pulled up into two red-tipped "horns".

Ultimecia's first alternate outfit, "Onyx Dress", colors her dress black and beige while her claws turn red. This may allude to Adel, another wicked sorceress that Ultimecia possesses in Final Fantasy VIII.

She wears a skin-tight dress with a plunging neckline and a fur ruffle around her shoulders. It is primarily black with a purple gradient along the bottom. A shell-themed headpiece adorned with jewels sits over her left temple with gold veins stretching over her cheek to her yellow eyes. She does not wear the decorative golden crest or capes that Edea does.

While Kain is striking down his allies and hiding them away, Ultimecia finds him and is curious about why. She asks what he was speaking to Golbez about that may have motivated his actions, but Kain refuses to answer, and the two fight. Ultimecia understands the strength that felled the other warriors of Cosmos, and departs, saying the cycle has become interesting.

Ultimecia is a Sorcerous Fusileer. Her attacks are themed around sorceress' knights and take the form of magical projectiles in the form of medieval weapons. All of her Bravery attacks have two forms depending on if

held or tapped, with her attacks changing substantially between forms to have different damage, block priority, and areas of effect. She is overall an excellent zoner who can keep opponents at bay with an endless barrage of attacks, and use them to stunlock the opponent to set them up for an Assist combo or HP attack. Her primary disadvantages are that many of her attacks have a long start-up and recovery time, and this means she is vulnerable to melee opponents. Her uncharged Knight's Lance is her best option to keep the opponent back due to its quick execution, but it has a small hitbox directly in front of Ultimecia and is easy to punish if the opponent anticipates it. 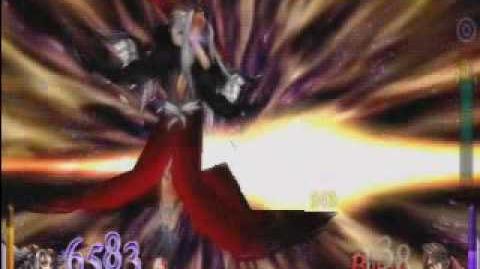 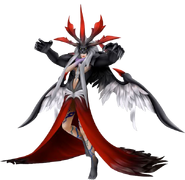 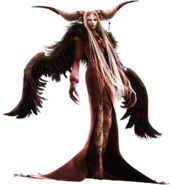 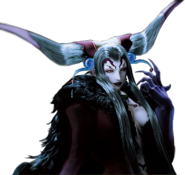 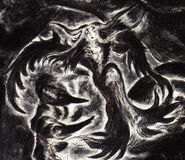 Ultimecia is voiced in Japanese by Atsuko Tanaka and in English by Tasia Valenza. She shares her Japanese voice actress with Rosso the Crimson from Dirge of Cerberus -Final Fantasy VII- and Arecia Al-Rashia from Final Fantasy Type-0.