Tasia Valenza
Ultimecia is a warrior of Spiritus in Dissidia Final Fantasy NT and its arcade version. She is a Marskman-type character who attacks with magically animated swords and axes in addition to casting traditional spells. Ultimecia returns from her original appearance in the 2008 Dissidia Final Fantasy and Dissidia 012 Final Fantasy, in which she had a very similar combat style.

Ultimecia's default costume, "Phantasmal Garment", is an updated version of her original appearance in Final Fantasy VIII and the Dissidia series. The magenta tips on her horned hair are now metallic and her aquamarine tattoos/body paint under her chest are darker than in the PSP games, now closer in resemblance to her artwork by Tetsuya Nomura. The first alternate coloration of this costume is an updated version of her "Onyx Dress" attire from the PSP Dissidia games, based on Sorceress Adel's color scheme from Final Fantasy VIII. The white parts are now darker, and the feathered details of the lowest part of her gown are black instead of white. The second alternate coloration may be based on her "Edea's Corpse" outfit in Dissidia 012: her gown is navy blue with purple gradients, her fur ruffle and her wings are light gray, the tips of the wings are purple, and her hair ornaments are black with her horn ornament dark purple with yellow accents. 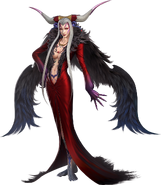 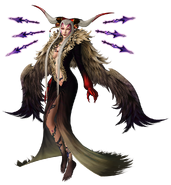 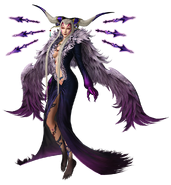 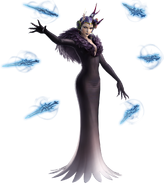 Ultimecia throws projectiles that she conjures. None of Ultimecia's weapons have appeared in the Final Fantasy series prior, and are original for the Dissidia series. The French naming and designs of her arms refer to her lavish sense of taste and style in Final Fantasy VIII'

Her default weapons are Witching Hour, which take the form of a sword, an axe, an arrow, and a spear. The swords are red, the spears blue, the axes green, and the arrows purple. Their designs are royal with an ornate flair. Her first set of alternate weapons are Looking Glass, in which the sword, arrow and axe resemble crystalline spikes that are primarily green, while the spear has a patterned bladed tip with a thin handle covered with a sharp guard at the base. These designs are spiked with crystal motifs. Her second alternate set of weapons are Grandeur, with golden arms with more elongated spikes, almost electrical-like across each weapon. The third alternate set of weapons are Nightmare, which take on Griever in their designs. The blades are crimson with the sword and arrow featuring Griever's wings, while the axe and spear incorporate his profile. The axe has Griever's side and long tail wrapped around the handle, and his extended wings serve as the axe blade. The spear features Griever's front profile at the top, and his extended horns give off the appearance of a trident. 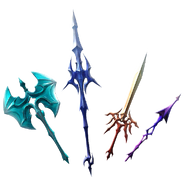 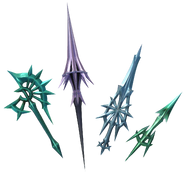 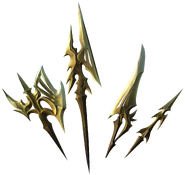 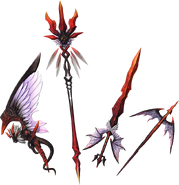 Ultimecia returns to World B, having been summoned by Spiritus as one of his champions to help generate battle energy. Ultimecia joins Spiritus's other champions when he reaches out to Materia. Like most of the other warriors, Ultimecia is disinterested in this new cycle and wishes to leave.

Ultimecia lingers around the Pandaemonium gateway when Kefka drags both Exdeath and Tidus into it with him. Kefka tries to persuade Exdeath and Ultimecia into destroying the world. Ultimecia speculates it would release enough energy to form an exit, but is interrupted by Firion and Shantotto, the latter of whom riles Ultimecia during a verbal argument and a battle ensues.

Ultimecia senses the gateway has formed, but is waylaid by Shantotto's magic. Ultimecia watches as Materia's warriors attempt to use the gateway only to be denied entry by a planesgorger. They are further sidetracked by Jecht while Firion and Tidus enter the Besaid gateway. Ultimecia, Exdeath, and Kefka give chase and another fight ensues, however, the planesgorgers are already devouring this realm and Ultimecia decides to retreat.

When the two gods decide to unite and stage a final clash, Ultimecia faces off against Terra by hounding her with her magic. Y'shtola comes to her defense. Ultimecia combines her magic with the Cloud of Darkness to create a powerful spell, but the plan is thwarted by Shantotto. Once Shinryu, the dragon god responsible for the planesgorgers, awakens and descends upon the battlefield, Ultimecia and the others turn their attacks against him, and after a long battle best him. With the threat eliminated, Ultimecia departs to her homeworld after bestowing her essence in crystal form for Spiritus to use in her place.

Ultimecia's gameplay is very similar to her gameplay in the original Dissidia, with most of her Bravery attacks having properties identical to attacks she had in that game, though now split up into two separate attacks rather than relying on button inputs to change their properties. Ultimecia assails opponents from long range with barrages of magical projectiles, and some of her attacks have a delay between firing and landing, allowing her to combo them together. The long duration of her attacks also allows her to easy combo with teammates by keeping an opponent stunned while her ally closes in. Her unique gimmick grants her a status buff as she attacks that increases the Bravery damage she inflicts, incentivizing the player to be aggressive with her. However, even with her buffs her damage is not overly impressive, and her attacks have small hitboxes and cannot reliably hit multiple targets. 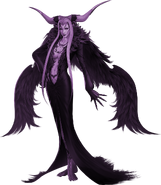 Sketch for the reveal of Ultimecia. 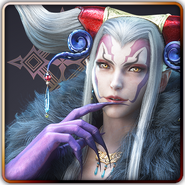