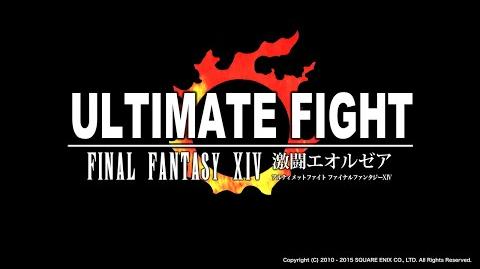 Ultimate Fight Final Fantasy XIV (アルティメットファイトファイナルファンタジーXIV, Arutimetto Faito Fainaru Fantajī XIV?) is a parody trailer for Final Fantasy XIV, released on April 25, 2015 on Square Enix's official Youtube channel of the game. It was created by Kazutoyo Maehiro, the scenario writer of the game.[1]

The trailer was created using Final Fantasy XIV in-game graphics and character assets, to present how the game will look like if it becomes a 2.5D fighting game. Square Enix noted at the end of the trailer that they have no plan to implement 2D fighting content to Final Fantasy XIV.

The character select screen features many characters from Final Fantasy XIV but only shown a fight between Yda and Livia sas Junius in a 2 out of 3 rounds format, taking place at Castrum Centri in Mor Dhona.

While Yda wins the first round by using her Fists of Fire in deliver a knock-out, she is quickly overwhelmed by Livia in the second round when knocked into the air and then receiving the end of a roundhouse kick. But during round three, when Livia was about to win, Yda uses "Limit Break Counter" to summon the rest of the Scions of the Seventh Dawn to her aid. Y'shtola shields Yda with a defense spell while Thancred flirts with a couple of Garlean ladies as a distraction. From there, Alphinaud and Alisaie Leveilleur triple-team Livia with Papalymo before he takes control of Livia's personal Magitek once he conjured a meteor. After Thancred joins the fray, Papalymo finishes the fight with Livia yelling for Gaius van Baelsar as the meteor crushes her. Though Yda is declared the winner, Minfilia takes the winner's spot to her dismay.

35 characters were shown on the character select screen:

Thancred having fun with imperial girls.