Ultima Weapon is an enemy from Final Fantasy X-2, found in the Ruin Depths and Floors 47-49 of the Via Infinito.
See also: Ultima Weapon (creature)

"A mighty fiend of legend, wielding greater magic than ever. This terror teaches all who approach the true meaning of "Ultima." Whatever you do, don't call it Atma."

"Even more powerful in its oversouled form. It can no longer think independently or vary its attacks in response to its opponent."

Dispel, Judgment, Punishment
Nothing to learn

Ultima Weapon is a powerful enemy, hitting hard with Judgment and Punishment. Ultima Weapon's attacks are formidable at low levels and its damage nullification ability Mighty Guard-G can make it immune to most physical and magical attacks; only specific attacks can penetrate it, such as Spare Change, Slots, Darkness, or certain captured creatures' abilities, like the Balivarha's Skewer and Nooj's Lightfall (Ultima Weapon has high resistance to Eject and Zantetsu), and this can force a party to flee if the appropriate dresspheres are not equipped.

Ultima Weapon has the Blue Bullet Supernova. The triggering of Supernova is not random; it occurs when its action count is at 30 or above, with its other attacks adding to the count, and being randomly chosen. Normal attacks increase the count by five, all other actions by two. Its normal (physical) attacks in normal (non-Oversoul) mode inflict Poison status.

As its Oversoul scan description indicates, Ultima Weapon's power in Oversoul comes largely from increased stats, notably Magic Defense and HP, and its range of special abilities is reduced. It loses Supernova, Mighty Guard-G, White Highwind, Break and Meteor, and the Poison component of its normal (physical) attacks, leaving only Judgement and Punishment. It gains Dispel and Osmose in Oversoul.

Ultima Weapon's Oversoul attack pattern is mostly reactive, retaliating with attacks identical to those used on it, if attacks are one of a fairly short list (Holy, Supernova, Arcana other than Black Sky, Black Magic, and some White Magic spells), or with physical attacks for attacks not on the list. If its counterattack is reflected back to it, it will retaliate with a further physical attack.

Protect and Shell are advisable for damage reduction. 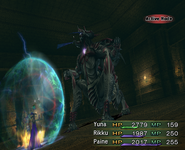 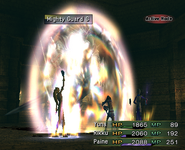 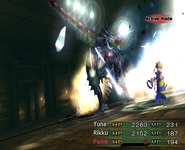