Ultima Weapon is a boss in Final Fantasy X fought in the Omega Ruins. It is the by-product of Omega Weapon's hatred for Yevon and his banishment.

Ultima Weapon's normal physical attack hits for around 2,500 HP damage, and has a small chance to shatter a petrified character. On its second turn, it will cast Confuse, Silence, or Break. It will then use Core Energy, a magical attack that can hit for anywhere between 3,000 and 9,999 HP. On its fourth turn, it will cast Confuse, Sleep, or Holy, which has similar variation in damage to Core Energy. It will then attack again before using Shimmering Rain, hitting everyone for about 2,500 damage.

Ultima Weapon's status-inflicting spells can be reflected back at it, although it is only vulnerable to Silence. Against aeons, it will use Core Energy, Shimmering Rain, and Core Energy for its second, third, and fourth turns. Hellfire and Thor's Hammer have alternate animations against Ultima Weapon.

Ultima Weapon is one of only two bosses (Lord Ochu being the other) that can be bribed, and can hand over up to 99 Pendulums if enough money is given. Bribe sums depend on the fiend's HP, and thus because its max HP is higher in the Int/PAL/HD versions, it needs to be given more money to get the full amount than in the original Japanese and North American versions. Soft resetting can be used to attain 99, or the player can bribe for approximately 1,999,980 gil for a good chance for the max amount. The Pendulums can be used to give an armor the Master Thief ability, which makes it easier to steal rare items.

Shell will protect against Core Energy and Holy, and the latter can be reflected. Ultima Weapon is vulnerable to Doom. The player can unleash the aeons' Overdrives for good damage, and aeons are immune to status ailments. Tidus's Hastega helps as well as any physical attackers having Quick Hit. Doublecasting Flare does a lot of damage with magic users. 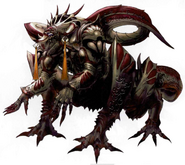 Shimmering Rain.
Add a photo to this gallery

Retrieved from "https://finalfantasy.fandom.com/wiki/Ultima_Weapon_(Final_Fantasy_X)?oldid=3368997"
Community content is available under CC-BY-SA unless otherwise noted.