Edit
watch 05:04
How to Defeat Ultimate Weapon and Obtain Cloud's Ultima Weapon in Final Fantasy 7
Do you like this video?
Play Sound

Ultima Weapon is Cloud's ultimate weapon in Final Fantasy VII. It is obtained by defeating the optional boss Ultimate Weapon. The weapon has very high stats, eight linked Materia slots, and a mechanic that causes it to deal more damage based on Cloud's current HP. The player can equip it to Cloud or throw it or sell it for 1 gil (but there is only one copy in the whole game).

Cloud's specific incarnation of the Ultima Weapon is a large glowing broadsword. In artwork and in its Final Fantasy All the Bravest sprite it has a golden blade colored purple in the middle, while in-game in other appearances it is blue in the center and white along the edges. In Final Fantasy VII the blade darkens the less HP Cloud has, and is brightest when at max HP. The handguard is curved down over the handle and features four cylindrical protrusions, two on either side, with a gemstone set into the handguard at the bottom of the blade that rises into the center of the blade itself. The blade's shape varies; in its 3D model, is a vaguely triangular shape tapering at the tip, while its depiction in the item gallery of International has it with a pronounced pentagon shaped blade.

In Dissidia Final Fantasy Cloud's Ultima Weapon is redesigned to emphasize both the industrial nature of its originated setting and biomechanical motifs that match its keeper, the Ultimate Weapon. The handle and hilt maintain its conical shape with a gold body and royal purple handle cloth, while five pipes protrude from the guard that branch out from a blue diamond-shaped gem and connect in a black batwing-shaped frame webbing; the handle fits into the vertical pipe while the rest are capped with red bronze cylinder pylons, presumably to slot in materia. The blade stands out and has a pronounced inward curved taper, the tip bulges in a pronounced heptagonal point, and is of a milky opaque crystal, with a narrow streak of blue down its center. This redesign has become the standard depiction of the VII incarnation of the Ultima Weapon in other spin-offs, with the exception of All the Bravest.

Ultima Weapon is obtained by defeating Ultimate Weapon. This can be done after Diamond Weapon is defeated. The player must chase Ultimate Weapon with the Highwind in a location it is found in the world map, starting with a crater near Junon, and fight it until it docks above Cosmo Canyon, where it can be defeated.

Ultima Weapon has the highest Attack stat of Cloud's weapons, but its damage is calculated differently from other weapons. Its damage depends on Cloud's current HP, as a percentage of his max HP, and the higher it is, the greater the damage dealt. The weapon's damage formula is as follows:

Ultima Weapon also has an Attack% (Accuracy) of 110%, and grants a +51 bonus to Cloud's Magic stat when casting spells. However, its Materia slots have no AP growth.

Ultima Weapon has the highest stats of any of Cloud's weapons, and eight Materia slots, though its Materia gain no AP. It is Cloud's most powerful weapon both for dealing physical damage in attacks and Limits, and in casting spells due to the Magic stat and number of slots.

Due to Cloud's high Strength and Magic stats, Ultima Weapon helps Cloud both for casting spells and for dealing damage. For physical damage, it relies on Cloud being at full HP to reliably deal damage. As all its Materia slots are linked, Support Materia can be used to link powerful Magic Materia, Summon Materia, or limited Command Materia, to achieve various effects. Since magic does not rely on Cloud's HP mechanic, it can be used consistently to deal devastating effects, but physical damage can also easily hit the 9999 damage limit at higher levels. The number of Materia slots makes it a good candidate for many Independent Materia as well.

One strategy is to link a powerful Command Materia that deals physical damage, or powerful non-elemental Magic Materia (such as Ultima, or simply with Master Magic), with HP Absorb to constantly heal Cloud to ensure that he is always at full HP. This means the player will not have to focus on healing him with other Materia, such as Restore, and can keep Cloud dealing damage.

Despite the HP mechanic the Ultima Weapon nonetheless is the most powerful weapon in Cloud's arsenal, as there are many ways to manage Cloud's HP and keep it full. This means it should be used over other weapons, with the exception of Apocalypse for farming AP.

Because Ultima Weapon has no AP growth, it can be a good idea to equip Materia such as Master Magic, Master Summon, and Master Command, which do not gain AP, or to equip Materia that is already mastered.

Cloud's EX Mode in his default outfit is to equip the Ultima Weapon. The Ultima Weapon grands Cloud the abilities "Ultima Weapon (ATK)" and "Ultima Weapon (CRUSH)." The first ability boosts Cloud's ATK according to the amount of HP he currently has in relation to his max HP, doubling his ATK at max HP and giving no bonus at 1 HP. The second ability gives all of Cloud's melee attacks Melee High priority, allowing them to crush normal guards and deflect lower-priority attacks.

Cloud equips the Ultima Weapon as his EX Mode in most outfits with exception of the first alternate outfit. Its abilities are identical to the original Dissidia.

A sword with the glow of life. Don't worry—even if you die, it will keep on living.

The Ultima Weapon is a premium weapon obtainable by downloading the Outskirts of Midgar World Ticket. It is potentially dropped by the Ultima Weapon, fought in Stage 6 of the area.

Cloud appears with the Ultima Weapon.

To celebrate the 30th anniversary of the Final Fantasy series, Nissin, the maker of Cup Noodle ramen, created 30 limited edition forks inspired by Cloud's Ultima Weapon. To be in with a chance of winning one, fans had to purchase a special box set of Final Fantasy themed Cup Noodles. The fork is around 24 inches in length.[citation needed] 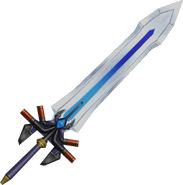 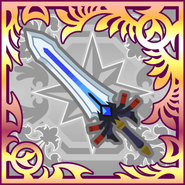 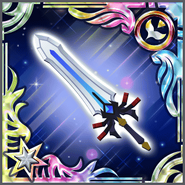