I am the one known as Ultima... Forged an eternity ago and left here... Forgotten in the mists of time... Long have I pondered what I should do... Long, long have I pondered... But now it seems I have an answer...

Attacks with fire and ice. Also uses Quake. It has no weaknesses, so you might as well fight it out hand-to-hand.

Ultima Buster, originally translated as Atma, is a boss in Final Fantasy VI. It is found in Kefka's Tower and is a stronger version of the Ultima Weapon. Unlike most of the other bosses in the tower, Ultima Buster is optional and can be avoided. The boss appears in a prison cell room originally in Vector, standing in the spot Kefka stood in when he was arrested.

Ultima Buster attacks with level three spells like Firaga, Blizzaga, Thundaga, and Southern Cross. When its HP falls to 32,640, it incorporates Flare Star, Tsunami, Quake, and Meteor into its attack patterns. When damaged in any way twelve times, it will glow and begin storing energy; after three turns it unleashes Ultima.

When killed, the Ultima Buster vanishes to reveal a save point.

It may be wise to bring Celes to absorb Ultima with her Runic. Besides Ultima, many of Ultima Buster's attacks are elemental and can be absorbed or nullified with the proper equipment set-up. It should not be too difficult to defeat though the player may be unable to kill it in twelve attacks, unless they spam powerful spells like Flare and Ultima. Once it begins charging Ultima, Ultima Buster wastes two turns doing nothing, giving the player free rein to go all-out and destroy it before it casts the spell. 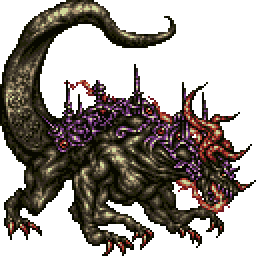 The sprite that is shared between Ultima Buster, Omega Weapon, and Ultima Weapon was used and modified for some of the Icedrake class dragons in Bahamut Lagoon, namely the Saint Weapon and Black Buster.

[view · edit · purge]Atma or Atman, in Hindu, Buddhist, and Jain traditions is a word that means self. It is the word that Buddhist monks use to refer to themselves as the first-person singular.