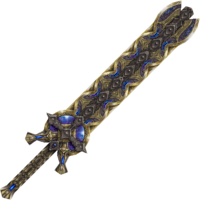 A sword from the faraway world of Eos. The prince of the kingdom of Lucis received it from his father for his sixteenth birthday and has refined it countless times. It boasts extraordinary cutting power due to the special engine embedded within.

The Ultima Blade (アルテマブレイド, Arutema Bureido? or アルテマブレード, Arutema Burēdo?) is a recurring weapon in the Final Fantasy series. It generally takes the form of a greatsword. It is not the same weapon as the similarly-named Ultima Weapon, a recurring ultimate weapon. Both can appear in the same game, the Ultima Blade always being weaker. Ultima Sword is another similarly-named recurring weapon.

The Ultima Blade is a high-rank greatsword that provides 118 Attack, 7% Combo Rate, and +10 Evade. All greatswords have 2.47s charge, and 1.2s action time, making them average when it comes to attacking speed. It can be bought for 22,800 gil at the Bazaar after trading in Adamantite x2, Death Powder x2, and a Gnoma Halcyon, or found as a treasure at Pharos. It requires 90 LP and the Greatswords 3 license to equip.

In the Zodiac versions, it provides 109 Attack, 20 Evade, 35 CT, 8% combo rate, and requires the Greatswords 3 license for 80 LP. It can be found as a treasure in the Cerobi Steppe (Crossfield) or Pharos - Third Ascent (Spire Ravel - 2nd Flight), bought from the bazaar for 12,800 gil after selling Adamantite x2, Death Powder x2, and Gnoma Halcyon x1, or from the Hunt Club sidequest. It is also an uncommon steal from Humbaba Mistant in Trial Mode Stage 64. It can be equipped by the Knight and Red Battlemage jobs, although the Red Battlemage must obtain the license for Chaos first.

The ultimate sword crafted with Insomnian technology. It absorbs the elemental powers of defeated foes.

Ultima Blade can be acquired as early as chapter 3. It has an attack of 364, Magic +30 and MP +40. Its blade is alloyed a metallic blue, with its engine finished in gold and its internal crystal components glowing red.

Like with all of the Insomnian technology weapons, the engine allows for elemental energy to be absorbed from felled foes, but the Ultima Blade has a greater chance of absorbing elemental energy than its previous versions. Should the player attain the Ultima Blade and complete the A Better Engine Blade sidequests, Cid will have a cutscene with Noctis about King Regis and the times they had in their youth. Cid gives Noctis his hammer, meant for Regis, instead making it a family gift.

Ultima Blade (FFXV) is a sword that provides 100 MP, 174 ATK, and increases Limit Burst damage by 50%. It is obtained as the Super Trust Mastery Reward from Crown Prince Noctis.

Only a blade forged in Insomnia would tirelessly absorb the life-force of fallen foes.

In December 2017, a Final Fantasy crossover quest was added to Assassin's Creed: Origins. The player can get a "chocobo camel" hybrid named Kweh as a legendary mount, Noctis's Ultima Blade as a sword and the Ziedrich as a shield. 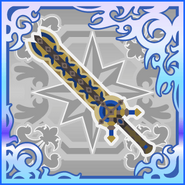 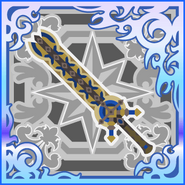 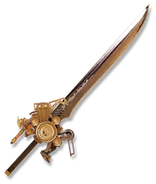