This place... This whole shrine is a totema!

Ultima is the totema of the nu mou in Final Fantasy Tactics Advance, and is the second totema fought by Marche Radiuju. Instead of battling Marche directly, she transports him inside of herself, where Marche must destroy a number of crystals, each able to cast spells against him. After being defeated, Ultima can be summoned by any nu mou member of Clan Nutsy to deal a large amount of MP damage to all enemies. 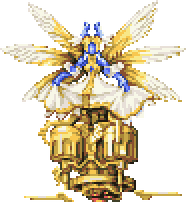 The crystals attack the intruding Clan Nutsy by using a standard physical attack when they are close enough. Their main skill, Logos, can Charm the player's units from four spaces away. Since they are just objects, however, they cannot move about, and their evade is 0. Once all the Ultima crystals are destroyed, Ultima herself is defeated.

The Logos attack can only go so far. The player will need to take advantage of this by fighting with Black Mages or Archers. It is good to have any moogle with 10 JP in this battle, because the fight can end easily by having them summon Famfrit. Additionally, the player can enter the battle while the Charm Law is in effect, making the crystals unable to use Logos.

Alternatively the player can equip items that nullify Charm, although the units' stats will still go down when Logos is used.

As the Ultima crystals are stationary, they do not have any movement stats.

As the Ultima crystals are fought as a group, their stat growth is lower than most other totema. While their HP, MP, and Speed are all very low, their offensive and defensive stats are all well above-average, particularly Attack and Defense.