Your defiance reaps you naught but death's embrace!

), also known as Altima, is the leader of the Lucavi demons in Final Fantasy Tactics and is the game's final boss. She is given the title the Angel of Blood (Bloody Angel in the PS version) (血塗られた聖天使, Chinurareta Seitenshi?) and is associated with the Virgo auracite.

Ultima has long white hair in a same full fringe as Ajora's and brown eyes. She has white succubus ears and wears a red high-neck long-sleeve leotard with a matching long gloves. She wears a red belt and red thigh-high boots with knife holsters adorned with two red belts where she keeps her long dirks. She has white feathered wings combining with small red devil wings at her back.

In her Arch Seraph form, Ultima appears as a giant black, white and purple skeletal monstrosity. Her face resembles a skeletal mask, her wings change into a large red devil wings, and she has red devil horns.

Due to her status as the Arch Seraph, Ultima cannot be scrutinized by mortals. She is described as the "ultimate being" whose deeds "rise above good and evil".

Impossible...this end to meet... I see it now, too late. In you...his blood, my vanquisher in times...long past. But not so soon...shall I accept defeat...

Ultima after being defeated before transforming

Saint Ajora Glabados, the founder of the corrupt Church of Glabados, serves as her host body. Ultima was killed 1,200 years ago, and the goal of the other Lucavi, led by Hashmal in her absence, is to resurrect her. Once that is done the Lucavi will have no need of auracite or the vessels they inhabit, and will be able to come and go as they please.

Ultima needs a person as a host body, but the only suitable host is Ramza Beoulve's younger sister, Alma. Ultima can be resurrected at the Airship Graveyard in the Necrohol of Mullonde, but to get there, the Lucavi must use a portal hidden in Orbonne Monastery.

As her title "Angel of Blood" implies, the resurrection requires a grand amount of blood be shed. The Lucavi use the church's influence to evoke the War of the Lions, but Hashmal discovers this has not resulted in enough bloodshed, and takes his own life to complete the ritual.

Ultima is resurrected and possesses Alma and attacks Ramza's party. Alma breaks free and Ultima manifests as a demonic being, but is killed by Ramza and his allies. Ultima gathers up even more power in a final effort to preserve her life, but ends up causing an explosion that destroys the Airship Graveyard.

Your soul itself shall not escape my wrath!

Ultima appears as a powerful demon reminiscent of a succubus. She begins the fight by summoning four Ultima Demons to aid her.

In her first form Ultima (聖天使アルテマ, Seitenshi Arutema?) uses several powerful attacks, including a version of Ultima more powerful than Ramza's; Alma and Ramza cannot learn this version, although they can learn their version from the Ultima Demons. Her physical attack has her slashing the target with her dirks.

After enough damage has been inflicted on Ultima, she transforms into a giant skeletal monstrosity (聖大天使アルテマ, Seidaitenshi Arutema?). This form is even more powerful, packs more HP and can cast more powerful spells like Divine Ultima, her most powerful move, and Grand Cross, which causes a plethora of status effects, including Petrify.

Ultima's job is High Seraph (Holy Angel in the PS version). Ultima's first form is level 56 with 70 Bravery and Faith, and has roughly 1400 HP and 480 MP. She is immune to all negative statuses except Disable, Blind, and Slow, and has access to the Arcane Magick and Chaos commands, as well as the abilities Brawler, Master Teleportation, and Absorb MP.

She comes with Divine Magicks and Divine Providence, as well as Faith Boost, Brawler, Master Teleportation, and Swiftness. She is immune to all negative statuses except Slow and Immobilize. Both forms have permanent Float, which makes Ultima immune to Earth-based attacks, and also increases her height by 1 more than where she is standing (if she's standing on a height 1, she is actually on height 2).

A being that has been set free from the laws that govern creation, surpassing pedestrian concepts of morality.

The High Seraph's ultimate form. Creator, destroyer, and master of both tranquility and chaos.

The formula for success rate of Divine Providence abilities is as follows:

Arch Seraph Job command. Magick that consumes its victim with a wave of absolute power.

Arch Seraph job command. All those embraced by this magick are banished to the netherworld.

"Ultima's Perfection", previously named "Altima, the Perfect Body"; is the final boss theme. It was renamed "Heartless Hellion" in the War of the Lions version.

It radically differs from "Ultima's Transformation", previously named "Altima, the Nice Body"; which is used during the first half of the battle, when Ultima is in her humanoid "High Seraph" form. When Ultima transforms into her monstrous "Arch Seraph" form, this song starts. The song gives the sense of destruction and doom, especially with the final few notes prior to the repeat. A new arrangement appears in Dissidia Final Fantasy NT. It is available to listen on the composer's Soundcloud.

Ultima the High Seraph appears as the final boss in the Orbonne Monastery raid. She obtains a new appearance based off of her various forms in Ivalice, although her humanoid form appears in the fight known as Demi-Virgo.

Ultima's final boss form appears as a boss. She is depicted in both her High Seraph and Arch Seraph forms. 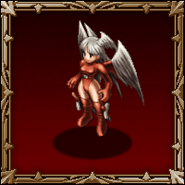 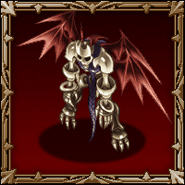 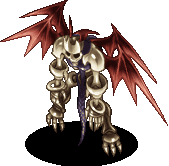 Master of the demonic Lucavi, this heavenly being is beyond the understanding of man. After wandering the world without form for generations, she will be reborn at last - in an ocean of blood and reeking of war.

Ultima appears in her humanoid form as an enemy in Battle Music Sequences. 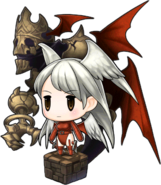 A being from the tales of auracite told in the faraway land of Ivalice who was existentialized by absolute truth. An "angel of blood" who commands ultimate power, whose deeds rise above good and evil. Leader of the mythical demons known as the Lucavi, she was resurrected by possessing Ramza's sister, Alma. However, Alma resisted, severing Ultima off from her body and impeding Ultima's revival. After being defeated by Ramza, she ascends to her ultimate form, transforming into a monstrous demon.

A blood-smeared high seraph which appeared from the land of Ivalice, liberated from the control creation. She used Saint Ajora as a host, but with Saint Ajora's death, Ultima's soul remained in an incomplete form at the Necrohol of Mullonde. Ultima returns to life as Saint Ajora and as Ramza's younger sister through Hashmal's offering of his life as sacrifice. She proved to be a formidable foe to Ramza with the ultimate in magic which is named after her very self - Ultima.

Ultima, alongside two Ultima Demons, appears as the boss of the Elite stage of the In the Name of Love event. She assumes her Grand Seraph form in a challenge stage released one week later.

The quote of Ultima in the PS version, "Open 7 doors to reach the tower of power! Ultima!" refers to the seven doors leading to the Ultima tome in the Mysidian Tower in Final Fantasy II.

It has also been known as the Bloody Angel. [view · edit · purge]An angel is a non-physical entity or spirit found in various religions and mythologies. In Abrahamic religions and Zoroastrianism, angels are often depicted as benevolent celestial beings who act as intermediaries between God or Heaven and Earth, or as guardian spirits or a guiding influence. Other roles of angels include protecting and guiding human beings, and carrying out God's tasks. The term "angel" has also been expanded to various notions of spirits found in many other religious traditions. In art, angels are often depicted with bird-like wings on their back, a halo, robes and various forms of glowing light.

Its role as the leader of the Lucavi could allude to the role of an archangel. [view · edit · purge]An archangel is an angel of high rank. Beings similar to archangels are found in a number of religious traditions, but the word "archangel" is usually associated with Abrahamic religions. The word is derived from the Greek ἀρχάγγελος (arch- + angel, literally chief angel).