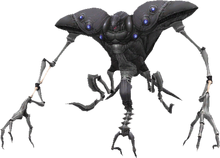 Ultima is a Notorious Monster in Chains of Promathia. He enters the storyline in Mission 6-2 "One to be Feared". After facing the quintuplet group Mammet-22 Zeta and Omega, players have to defeat Ultima, who takes the form of a floating, many armed "Biotechnological Weapon." He has about 15,000 HP and is very resistant to all damage. He is notably small, fitting on the deck of an airship with ease.

Ultima fights in a traditional manner, though his difficulty comes not with the ever increasing haste effect of his attacks, but instead on his deadlier and deadlier tiers of Weapon Skills. Ultima has four categories of Weapon Skills and they are very powerful.

Using a CCB Polymer Pump, a crafted item, will prevent Ultima from using any Weapon Skills against the party for a period of about 1 minute. The pumps are quick to use, requiring only 3 seconds or less.

If the players are successful in defeating Ultima, they will have beaten the mission and moved on to Chapter 7 of the Chains of Promathia storyline. All three encounters (the Mammets, Omega, and Ultima) must be defeated within the span of 45 minutes, which can be rather challenging, since this time also includes more than a couple cutscenes as the party searches for Prishe.

Ultima has no known strengths or weaknesses to any element.

Followed 5 seconds later by one of the following elemental cone attacks, all of which do 490 damage if unresisted:

From 0 - 20% HP: Ultima spams WS at this point, one second after finishing one move, it starts the next.

This section about an enemy in Final Fantasy XI is empty or needs to be expanded. You can help the Final Fantasy Wiki by expanding it.
Community content is available under CC-BY-SA unless otherwise noted.