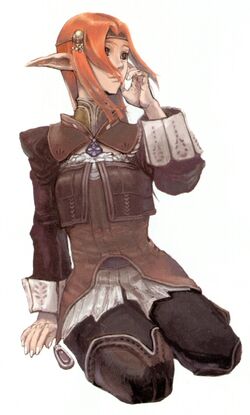 Ulmia's alter ego is a bard and she plays songs such as Victory March and Mage's Ballad III.

Granddaughter of Despachiaire, the Tavnazian elder. She unsuccessfully attempted to join the Tavnazian Cathedral Choir at a young age, but was later singled out by Cardinal Mildaurion herself for her beautiful voice. She is believed to be the only surviving member of the choir (until Emeline is found), and the only one capable of performing the known verses of the Lay of the Immortals, or Memoria de la Stona, the hymn to awaken the sleeping gods. Ulmia is a childhood friend of Prishe, even though, unlike her, she has been able to age normally. She thus accompanies her through thick and thin in Chains of Promathia.