Deep in the sunbaked south, surrounded by the shifting sands of an endless desert, she rises. A solitary rose amidst the dust and rock. A symbol of defiance. Her name: Ul'dah. Even with the coming of the Seventh Umbral Era, hope springs eternal for the mongers and merchants who vie for lost fortunes in this bustling oasis. As the Twin Faces of Nald'thal maintain Their vigil over all that has been and shall be, the present proffers a brave soul... ...One whose arrival could mark the beginning of a new era of prosperity for the realm. May the Traders nurture our fortunes as They kindle the flames which burn within us all. For by fire are we reborn.

Introduction for players starting in Ul'dah

Ul'dah is a city-state in Final Fantasy XIV located in the deserts of southern Aldenard. It is the most wealthy of the city-states, its flag bearing scales as a symbol of their commercial significance in Eorzea. The city-state was once exclusively populated by Lalafells, and the royal family is of this race, but the prospect of wealth attracted all peoples from across the world. The majority of the Syndicate members are Lalafell.

The destroyed nation of Nabaath Araeng appears to have been its counterpart in The First.

The bustling commercial hub of Ul'dah sits amid the desolate desert landscape of southern Aldenard. The city is organized strategically around the dome-shaped citadel at the center. Its towering fortifications and protective outer walls are visible for malms in all directions to deter would-be besiegers.

Visitors from every corner of Eorzea come to Ul'dah to partake of the city's famed recreation, most notably the fighting arenas and gambling halls. Ul'dahn culture is known for its affluence, and the nation's wealth largely comes from its abundant mineral resources and prestigious clothcrafting industry.

Historically, the sultan claims sovereignty over Ul'dah, but true power is wielded by the Syndicate, an elite group of six of the most influential and richest members of society. Nald'thal is the city's patron deity and two great halls devoted to his two aspects are found in the eastern and western sections of the city.

The culture and politics of Ul'dah has greatly been dominated by trade and profiteering, affording the Syndicate a significant power base. Influence and most importantly wealth are the criteria for membership, and seats on the Syndicate can be bought. Syndicate members typically fell into two camps: Royalists who supported the monarchy, and Monetarists who prefer to displace the monarchy and exert more control over the city-state. Though Sultana Nanamo Ul Namo is officially the head of state in Ul'dah, her power has been eroded by the largely Monetarist Syndicate, reducing her to a figurehead.

As of the events of A Realm Reborn, the Syndicate was chaired by the following:

General Raubahn is the lone Royalist on the Syndicate, and earned his place thanks to using his winnings from a high-stakes gladiatorial match to purchase both the Coliseum and a seat on the Syndicate.

Located near the Gate of the Sultana, the Ossuary is a source of knowledge for the city, as its many books make evident. It also serves as the home of the Thaumaturge's Guild.

This small casino is owned by the Mirage Trust, headed by Teledji Adeledji. It is also the home of the Pugilist's Guild.

The headquarters of the Immortal Flames. Players who are affiliated with that Grand Company can obtain tasks, goods, and create a Free Company here.

Tucked away in an alcove near the Hall of Flames, the city-state's Aetheryte Crystal can be found here.

The avenue contains both a Linkshell Vendor and a Delivery Moogle. A dancing troupe can be found here.

A lift will take players to either the Chamber of Rule or the Airship Docks.

A tavern and Adventurer's Guild run by Momodi. Players starting in Ul'dah will initially be working under her. Inn and Levequest services are also available.

Gate of the Sultana[]

This business is home to the Weaver's Guild where Adventurers may learn the art of weaving from the guildmaster, Redolent Rose. It is owned by Lord Lolorito Nanarito of the Syndicate.

An arena dedicated to gladiatorial sports. To that end, the Gladiators' Guild is in charge.

Located off the side of the Royal Promenade, this hallway leads to the Alchemists' Guild.

Ul'dah's climate may exhibit any of the following weather conditions: 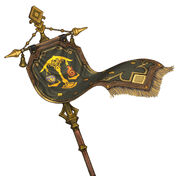 Ul'dah was the most densely populated city in the game. Its geographic placement between Limsa Lominsa and Gridania made it a commercial hub for adventurers in spite of the barrenness of the outlying region. It was the place where the Main Scenario quests converged after the brief narratives unique to each city-state were completed. It was the the Source equivalent to the Grand Duchy of Jeuno, the main difference being that it is a starting nation.

Ul'dah saw some of the worst server instability because of its player population density, including instances where the entire Thanalan region would crash. The Inn, originally accessed via the Quicksand (Ul'dah's Adventurer's Guild), was shut down for several weeks shortly after its release, attributed to the traffic in the area straining the server. Square Enix was unable to get it to function until they created a "back door" in the Gold Court, the core of the city.

Between the lag, the resulting player complaints, and a general desire to evenly distribute player activity, Square Enix developed the Mercantile House feature to attempt to spread players to the other two city-states, but a few factors made this futile:

Like the other city states, Ul'dah as a whole is largely intact, and contrary to what is shown in the footage of Bahamut's rampage at the end of 1.0, it was not directly damaged by the Calamity (or at least not to the extent the cinematic implied). It has, however, been redecorated and some spots have been modified, such as the addition of the Immortal Flames headquarters in the wall where the Market Wards once stood. The Milvaneth Sacrarium is currently inaccessible, being attributed to damage from the Calamity. The addition of jumping allows players to quickly drop to from the upper to lower levels in the Gold Court.

The brothel aspect to the Miner's guild has been removed; although the stage is still there, it appears the performers have moved to the Ruby Road Exchange.

In concept art of Nanamo Ul Namo's throne room and the Syndicate meeting table, the Syndicate members are all depicted as Hyur, despite the majority being Lalafell in the published version of Final Fantasy XIV.

"A New Hope" plays in Ul'dah during the daytime and "Sultana Dreaming" plays at nighttime.

Ul'dah appears as the FMS for "To the Sun".

Ul'dah has seen the worst effects of the Seventh Umbral Era, being the only city-state to endure full-scale invasions of powerful Deepvoid. After the final save maintenance, chocobos could be ridden in town.

This section about a location in Final Fantasy XIV is empty or needs to be expanded. You can help the Final Fantasy Wiki by expanding it.
Final Fantasy XIV setting
Français Português do Brasil
Community content is available under CC-BY-SA unless otherwise noted.
Advertisement