It is often those who desire nethicite whom the nethicite itself desires.

Great-chief Uball-Ka is a non-player character from Final Fantasy XII. He is the leader of all the Elders of the garif in Jahara. He has a small part in the great cockatrice escape quest.

Uball-Ka resides in the tent further inwards of Jahara. When Ashe follows Fran's advice to meet with the garif about the nethicite retrieved during the events in the Tomb of Raithwall, she was brought to the Great-chief. Uball-Ka disappoints her when she asks for ways to use the stone, because he himself does not know how.

He then relates the history of the garif people in times past when the "Gods" granted them the nethicite. At the end of their meeting, Uball-Ka reminds Ashe that someday her descendants will wield the nethicite, which by then would be filled with power.

Uball-Ka is voiced by Yoshisada Sakaguchi in the Japanese version.

He is voiced by Michael Chinyamurindi in the English version. 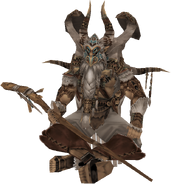