Tzen is an optional town in Final Fantasy VI located at the north end of the Southern Continent. It was once a monarchy before it was invaded by the Gestahlian Empire.

When the Empire invaded Tzen, they killed off their royal family. Young men of appropriate age were conscripted and taken away to serve in the military, leaving the town populated by women, children, and the elderly. Imperial troops roam the streets making some reluctant to venture outside.

In the World of Ruin, Celes comes to Tzen from Albrook, following rumors of a man searching for his friends. As she arrives at the town, Kefka attacks Tzen with the Light of Judgment. The mansion on the north end of town begins to collapse, and Celes finds Sabin holding up the structure. Celes races inside the building to find a child trapped in the basement, and the two narrowly escape the home before it crumbles. Sabin joins Celes, the discovery of his survival filling her with hope that the other members of the group are still alive.

Tzen is located entirely on elevated ground, with a stairwell providing the only entrance into town. Shops are built into hills on the edge of town accessible by staircases, save for the Item shop in the center of town. The northern edge of town is dominated by a large manor house, which in the World of Ruin is attacked by Kefka and collapses.

For the items in the crumbling house, see Crumbling House

The only treasure to acquire in Tzen outside of the Crumbling House is the magicite Seraph, which is purchased from a rogue behind the Relic shop once the Magitek Research Facility is completed.

Once the player has completed the Magitek Research Facility, in the trees behind the town's Relic shop is a thief who stole a piece of magicite from the facility and will sell it to the player. In the World of Balance he charges three thousand gil for it, but in the World of Ruin he sells it to the player for only ten gil. The magicite contains the esper Seraph.

In the World of Ruin, the first time the player enters Tzen, Kefka attacks the town with his Light of Judgment, causing monsters to infest a manor home and the house to crumble while the child of the owner is still inside. The party finds Sabin holding up the house, and he sends them inside to save the child before the house collapses. The player then has six minutes to get inside, rescue the child, and escape. Afterward Sabin rejoins the party.

It is possible to do this quest at the start of the World of Ruin with only Celes, but it can also be skipped until later. 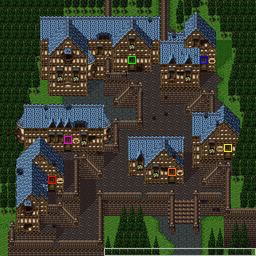 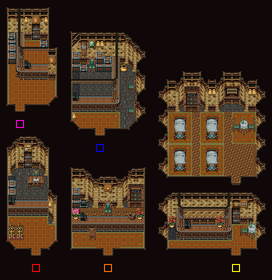 "Under Martial Law" is Tzen's World of Balance background theme, and is replaced by "From that Day On..." in the World of Ruin.

The original idea for the Tzen event in the World of Ruin was to have Sabin die if the player ran out of time while in the crumbling house. Were the player to return to Tzen with Edgar he would wander forlornly in the middle of the night, searching through the rubble in vain. However, the World of Ruin was seen as dark enough and the event was changed.[1] 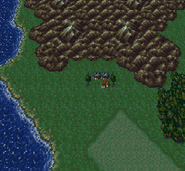 Tzen on the World of Balance map (SNES). 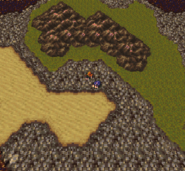 Tzen on the World of Ruin map (SNES). 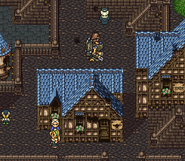 Tzen in the World of Ruin (SNES).

Sabin holding up the house (2014 mobile/Steam).