Final Fantasy Wiki
Register
Don't have an account?
Sign In
Advertisement
in: Characters in War of the Visions: Final Fantasy Brave Exvius, Paladins

So, it has come to this.

Tyytas Groms is a playable character of War of the Visions: Final Fantasy Brave Exvius. Known as the Solitary Holy Knight, Tyytas Groms is the second son of the Groms family. After his older brother Howlet was disowned, he decided to go with him on a journey along with their younger sister Chel. He has a strong bond with Howlet and is very protective of Chel.

A Damsel in Distress[]

Tyytas, Chel and Howlet are in the middle of some plains. Tyytas takes a breath and mentions how it was grueling. Howlet says it's not worth the big fuss. Tyytas swiftly turns to his brother Howlet and says that it is, mentioning that Howlet is too trusting of women. He asks Howlet how many times it would take of being decived for Howlet to come to his senses. Howlet tells him that a knight can't help but rush to the aid of princesses in trouble. Tyytas says as if Howlet was a knight to begin with. An excited Chel asks Howlet if she can become a knight. Howlet laughs and says that Chel would become a princess and not a knight.

Suddenly, a woman's scream is heard. Howlet runs in the direction of the scream and says someone's calling for him. Tyytas laments that it's another woman, mentoning that he has a bad feeling about it but that he can't just stand idly by. Tyytas and Chel follow Howlet.

The trio run into an open plain and watch as two young women are surrounded by soldiers. Chel asks Tyytas what's wrong and if he's gonna go help. Tyytas notices that their opponents are strong soldiers from Rundall. Chel asks him if they're bad, with Tyytas saying that Rundall has been waging war on neighboring nations in a bid to expand their territory.

A Rundall soldier steps away from the women and asks the trio to identify themselves. Before Tyytas could explain who they were, Viktora and Luartha run from the soldiers and towards the trio. Viktora states that they happened to run into some good men, mentioning that something good comes out of screaming every once in a while. Luartha pleads the trio for help as they were suddenly ambushed by Rundall soldiers. Tyytas is shocked by the claim. The Rundall soldier says that if they intend to interfere, they won't make it easy for the trio.

After defeating the soldiers from Rundall, Chel asks if they're all dead. Tyytas tells her not to fret as they just won't be able to move for a while. Howlet interjects and says it's because they barely even exerted themselves. Chel praises her brothers. Viktora says to the trio that they wouldn't have been able to make it without their help, with Luartha thanking them as well. Tyytas asks what the Rundall soldiers wanted to do with them, giving Viktora some pause. Howlet tells Tyytas that it's nothing for him to pry into, however Tyytas asks what Howlet is thinking. Tyytas says that Howlet just charged in without knowing who was at fault. Howlet tells Tyytas that it is Tyytas who doesn't know, mentioning that they're in Lykeros territory. Howlet says that Rundall soldiers are in Lykeros territory unleashing their chaos on another nation's land, so there's no doubt that Rundall is at fault.

Tyytas mentions that Howlet doesn't seem to get it, that Rundall and Lykeros are currently in the midst of war. As such, Tyytas says it's not out of the ordinary to find soldiers from Rundall within Lykeros territory. Tyytas then tells the two women to be careful, telling his siblings that they need to get going also. Viktor asks who the trio are, with Luartha mentioning that they don't seem to be from either Rundall or Lykeros. Howlet says that he is just a handsome wanderer, with Tyytas mentioning it quite bold to say so. Howlet says he doesn't like to lie, while Viktora asks if they have roots somewhere. Viktora walks to Howlet and says she knows he was trying to hide his swordsmanship, claiming he isn't an ordinary traveler.

Howlet laughs, feigning embarrassment while saying he had planned on hiding his genius talent but that it was bound to reveal itself anway. He says he even frightens himself at times. Viktora continues to prod and ask where the genius hails from. Howlet apologizes and mentions he won't divulge that information at all as he believes a measure of mystery keeps a man more alluring. Tyytas mentions that Howlet is putting on airs even though he ran away from training. Chel confirms that their father got angry and kicked Howlet out of his home. Howlet laughs it off and supposes that everyone has a past. Tyytas says in other words, that their brother Howlet was disowned after skipping out on his training and that Tyytas and Chel as his worried siblings had followed after him. Luartha takes note of Tyytas's words as Tyytas asks them if that was enough, stating that they will be on their way. Howlet tells the two women that he wishes he could stick around and to please excuse his tactless brother. Chel tells them goodbye as well.

Viktora mentions it's quite a surprise, with Luartha agreeing, stating that they were able to meet skilled men. Viktora says they could be of use to their plans, while Luartha says that's what she's talking about, mentioning that it's never a dull moment with Viktora.

The trio find themselves in another plains area with fallen Rundall soldiers. Tyytas says it's just as he feared, as he suspected those two were harbingers of misfortune. Chel asks him if they're harbingers, to which Tyytas confirms as they've been running into Rundall soldiers ever since their encounter with Viktora and Luartha. Howlet asks what's wrong with it as every encounter they have with a Rundall soldier is one less encounter for those two princesses. Tyytas asks Howlet what he means as if the current situation continues, Chel might even be put into harm's way. Howlet says not to worry as he is there for them, while Chel says how cool Howlet is.

Tyytas turns around and senses a presence, asking who goes there. He sees Viktora running and turns his back towards her, crosshing his arms. Howlet approaches the exhausted Viktora, asking what the matter is and presuming that she was unable to forget about him. Howlet decides to introduce himself and his siblings. Viktora introduces herself and states that Luartha was carried off by Rundall soldiers. Howlet is intrigued while Tyytas states that enough's enough and that they shouldn't be entangled in Viktora's affairs. Viktora apologizes but Howlet tells her there's no reason to apologize. Howlet asks what Rundall soldiers are doing so far inside Lykeros territory. Viktora's shocked to hear that they haven't heard. She says that Rundall won the war with Lykeros and that's why there is no one to oppose them within the territory. Howlet deduces that the Rundall soldiers must have free run of the place, with Chel saying that they can't just let bad guys do whatever they want.

Howlet asks Viktora where Luartha is, with Tyytas saying that Howlet needs to stop diving headfirst into situations that don't involve him. Howlet infuriatingly asks if Tyytas is suggesting that they abandon the captive princess, with Tyytas confirming that is what he's suggesting. Viktora says she saw Luartha being taken to Lykeros Castle, intriguing Howlet. Tyytas puts his hand up on his face as he asks Howlet if he plans to invade an enemy stronghold with only themselves. Howlet says it would be rather foolish to go in through the front door, with Tyytas asking if Howlet has a plan. Howlet says that they should wait until nightfall, with a bewildered Tyytas asking if that's the plan. Howlet says he's not used to spending time with princess during the night and Chel wonders why that is, wondering further if a prince will visit her once she's an adult as well. Howlet laughs and says that if one visits Chel, he'll tear him limb from limb. Tyytas tells Howlet he is opposed to the plan.

Howlet, Tyytas, Chel and Viktora have managed to inflitrate Lykeros Castle. Viktora comments on how she never would have thought it'd have been so easy to sneak into, complimenting Howlet on being something. Chel also calls Howlet amazing. Howlet laughs and says it's all part of being a gallant gentleman. Tyytas turns around and comments that Howlet doesn't lack the gall to say it. Chel turns to Tyytas and asks if he didn't wanna come to Lykeros Castle, then why is here with them. Tyytas tells her to shut up and says he came because he's worried about them all, asking if they're too dim to realize that. Chel loudly calls Tyytas a meanie. Tyytas tells them to keep it down, lest someone realizes they're in the castle. Chel cries and Tyytas apologizes to her, to which Chel easily forgives him.

Howlet asks if they can move on, to which Chel agrees, however Tyytas asks if Howlet knows where in the castle Luartha is being held captive. Howlet tells Tyytas he knows where she is and Tyytas wonders how could he know. Howlet says a castle has a dungeon and if a princess is being held captive anywhere, it would be in the dungeon. Tyytas is aghast by Howlet's conclusion.

Rundall soldiers confront the trio and yell out that they're in league with Luartha. Howlet denies that they are in league with her, but mentions that it's not out of the question if Luartha and Howlet become family soon enough. Tyytas tells Howlet to stop complicating matters, to which Howlet says he's speaking the truth. Tyytas wonders where Viktora has went, realizing she's disappeared. Howlet asks how they should deal with this situation, with Tyytas commenting that Chel will be put in danger, to which Howlet says that's no good as Chel is his treasure. Chel praises Howlet as the best. The Rundall soldier calls the trio a tight-knit little family, ensuring them that they'll be the same way in the afterlife. Tyytas tells Howlet they need to scatter the soldiers and make a break for it, to which Howlet agrees. The trio then unsheathe their weapons and face the Rundall soldiers.

A paladin and the second son of the Groms family. Worried for his older brother, Howlet, whom their father and master disowned, he decided to accompany him on his journeys. While he is verbally strict on his older brother, their bond is strong, especially regarding their younger sister, Chel—both would come to her aid no matter the cost.

Tyytas Groms is an MR-rarity unit of the Dark element whose main job is Paladin, while his sub jobs are Red Mage and Viking. He can equip the following items: Sword, Shield, Helm, Armor, Accessory. His unit cost is 60.

His Master Ability increases his own Pierce/Missile Attack Resistance by 10% and decreases his AP consumption by 25. He has no limit burst.

Forged by a prominent swordsmith who also happens to be a friend of Tyytas's father. A curious blade designed more so to protect its wielder than to defeat their enemies. Extremely complementary of his stoic nature, Tyytas sees the blade as something akin to another version of himself.

His Trust Master Reward is the Sword of Ehwaz weapon which bestows HP +310, ATK +62, DEF +10 and Normal Attack (ATK Down) Granted. 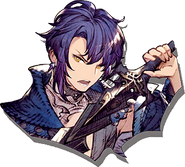 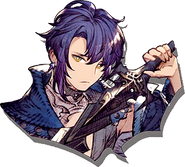 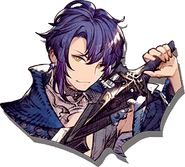 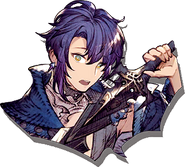 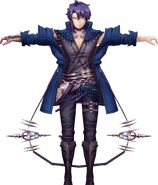 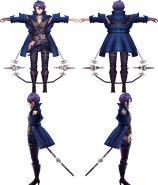