Tyrant is a boss in Final Fantasy XII found in Giruvegan, guarding the Way Stone that leads to the Great Crystal. It is also fought in the Zodiac versions' Trial Mode at Stage 55 along with three Piscodaemons where the Artemis Bow (uncommon) and Gastrophetes (rare) can be stolen from it.

Being a guardian beast of Giruvegan, set by the masters of the ancient city to guard the lowermost level against intrusion.
Though originally a variety of wyvern, potent Mist has transformed its wings into sharp hook-like protrusions, a shadow of their original size.
Its undying loyalty makes the Tyrant a formidable barrier to entry into the ruin's depths.

The party cannot use Technicks.

The party cannot use Technicks.

The player cannot use Technicks in this battle. Tyrant focuses on one target at a time. It is weak to Ice, and it does not have the "defense increase on low health" augment bosses usually have. It is susceptible to Confuse.

If the player has the Trident or the Icebrand, they may prove useful.

Bubble or Bubble Belt are useful. The player can also summon Mateus. It is best to save healers' MP since the party cannot use Charge.

When Tyrant's HP falls below 50%, the party should cast Blizzaga to take advantage of its weakness. The spell's power can be boosted by equipping Glacial Staff. The Nihopalaoa + Nu Khai Sand (Smelling Salts) trick can be used to buy time (to heal, buff, etc) if needed.

If the player has a low enough level character, the Accuracy underflow bug can be used to continuously inflict Confuse on the Tyrant, making the battle trivial.

Tyrant is the second boss in Pharos Sirius introduced in patch 2.1. Its appearance from Final Fantasy XII is mostly unchanged. 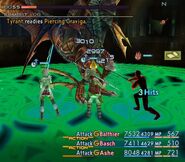