The Tyrannosaur (ティラノサウルス, Tiranosaurusu?), also known as Tyrannosaurus, T-Rex, T-Rexaur, and T Rex, is a recurring enemy in the Final Fantasy series, based off the dinosaur of the same name. It has alternately appeared as a living dinosaur or as a reanimated skeleton. Several other Tyrannosaurus-based monsters have appeared in the series as well.

The Tyrannosaur, also known as the T Rex, appears in the Great Desert and the forests around Lufenia. The Allosaurus, originally translated as Tyro, is a weaker form found in the same regions.

The Tyrannosaurus or T-Rex is a monster found exclusively in the Advance and Complete Collection versions during Porom's trial . This enemy counters elemental magic with higher-powered spells of its own.

The Tyrannosaur, or Tyrasaurus, is an undead monster that the Warriors of Light battle in order to save a moogle. The creature can be defeated with a single Phoenix Down.

The Tyrannosaur is a dangerous enemy with a high experience yield. It can cast Meteor, and is capable of surrounding even if the party is equipped with an Alarm Earring.

The T-Rexaur, Archaeosaur or Archeodinos is an extremely powerful foe that can be fought early in the game. Quistis Trepe uses this enemy to introduce the Escape command if Squall Leonhart is unfortunate enough to encounter one outside the Fire Cavern. They can also be found in the Balamb Garden training center, and on the Island Closest to Hell.

The Tyrant genus of monsters are a class of enemies including the Archaeosaur, Tyranorox, and Wild Saurian. The Wild Saurian in particular is notable for its ability to level up to 99 by eating the local wolves, despite being found directly outside the starting location of Rabanastre.

Tyrannosaurs are indigenous to Dravania, particularly near the caverns of Mourn, with a similar creature called Archeosaurs inhabiting the Churning Mists.

A closely related species are the Vinegaroons, who look similar to tyrannosaurs but possess bulky plates on its scales and uses different attack abilities.

A Tyrannosaur mount can also be acquired in The Forbidden Land of Eureka from an Anemos Lockbox. The Tyrannosaur mount is also able to fly, its description stating that it uses the turbulent aether absorbed in its body from the Isle of Val.

The T Rex is an enemy and also a possible monster that the party's monster unit(s) can transform into.

The Tyrannosaur is an enemy family in Final Fantasy Dimensions. These enemies resemble dinosaurs. The Torosaurus is a uniquely designed enemy who also resembles a dinosaur.

The pictured enemy in this article is named Earth Raptor in English, referencing the velociraptor or one of a few related species, however its original Japanese name is "Earth Dragon", a reference to the Earth Dragon from Final Fantasy VI.

The Final Fantasy V incarnation of Tyrannosaur appears as an enemy.

Even in death, this monstrous skeletal lizard has not lost its taste for blood and flesh.

The Tyrannosaurus appears in Final Fantasy All the Bravest as an enemy encountered on the Troia Range. It uses Mad Rage and drops the Fire Lash. 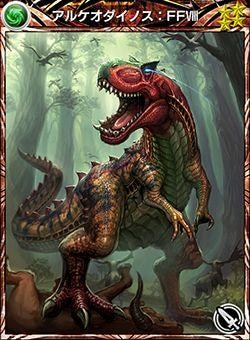 [view · edit · purge]The Tyrannosaurus is a genus of dinosaur that lived during the late Cretaceous period. Its scientific name means "tyrant lizard". The species Tyrannosaurus rex is one of the largest land predators ever known and means "king of the tyrant lizards".