Typhon, known as Typoon in the original PlayStation release, is a Summon Materia in Final Fantasy VII. It summons Typhon, a pink monster who performs the attack Disintegration to deal high Fire, Ice, Lightning, and Earth damage to all enemies, which ignores Magic def.

The Typhon Materia has the element Wind[note 1], despite not dealing any Wind damage in its summon attack. This allows it to be paired with the Elemental Support Materia on weapons or armor to deal or resist Wind damage respectively.

The Typhon Materia is found in the treetops of the Ancient Forest.

Summoning Typhon costs 180 MP, and performs Disintegration. This attack deals immense Fire, Ice, Lightning, and Earth damage to all enemies at 6.875x the base magic damage, ignoring their magic defense, which cannot be reflected.

Typhon's damage is similar to Bahamut ZERO, but it is elemental damage, meaning that it can exploit enemies' weaknesses to elements that Bahamut ZERO cannot, and potentially deal more damage. However, the elemental damage also means some enemies can resist or absorb parts of the damage, meaning it is important to know which to use. Typhon can be linked with Support Materia, including HP Absorb to heal the summoner, MP Absorb to mitigate its huge MP cost, or either MP Turbo or Quadra Magic to deal even greater damage.

The Typhon Materia can also be linked with the Elemental Materia. If linked on weapons, it causes physical attacks to deal Wind damage, and if linked on armor, it allows the character to resist, nullify, or absorb Wind damage, depending on the level of the Elemental Materia. The drawback to using it this way is that Typhon comes with a significant -10% HP change when equipped. It also comes with other stat changes, namely +15% MP, +4 Magic, and +4 Magic def. These changes do not benefit physical attackers, and there are few cases where Wind damage on physical attacks is worth the 10% HP penalty if they never plan on summoning Typhon. Therefore, Typhon is given used on characters with an existing high Magic stat to further benefit and deal more damage when summoning Typhon, including Cloud, Red XIII, Yuffie, Cait Sith, and Vincent. Barret is also a great choice for the Materia, as it can hold a large amount of AP, which causes Barret's Missing Score ultimate weapon to deal more damage. 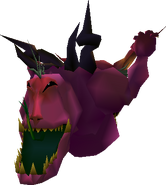