A monster first appearing in Final Fantasy VI. Ultros never fails to call him "mister". With a harsh cry of "FUNGAH!!!" he uses his powerful Snort to send foes flying.

Typhon (テュポーン, Tyupōn?), also known as Typhoon or Chupon, is a recurring creature in the Final Fantasy series. He is Ultros's partner and also appears as a summon. Typhon appears as a large purple and pink monster with a large mouth and a second face on his rear end. Typhon's trademark attack is Snort, which can either kill a party member instantly or remove them from battle.

Typhon appears in the Dawn of Souls, Final Fantasy 20th Anniversary, iOS and Windows Phone releases as an optional boss in Whisperwind Cove, appearing along with Orthros, Phantom Train and Death Gaze. Typhon can use Snort to instantly kill a party member, and drops a Genji Helm upon defeat.

In its first appearance, Typhon debuts when the party attacks the Floating Continent, backing up Ultros when he is defeated. Typhon's Snort blows the party off the Blackjack and into a battle with Air Force.

After the cataclysm, Ultros is hired as a receptionist at Dragon's Neck Coliseum, and Typhon fights in the arena on his behalf to help him. If the player bets an item of insufficient rarity or value, Typhon will put up an Elixir and battle the player, using Snort on his first turn to end the battle instantly and the item that was bet is returned to the player.

Typhon (known as Typoon in the PlayStation release) is a summon. His Summon Materia is located in the Ancient Forest. Typhon's special attack, Disintegration (天地崩壊, Tenchi Hōkai?), costs 160 MP, and inflicts Fire, Ice, Lightning, and Earth elemental damage on all enemies, ignoring defense but missing flying enemies. Its spell power is equal to 6.875x the base magic damage.

Typoon can be summoned in battle using the appropriate Materia. Typoon is Comet-elemental.

This section in Before Crisis -Final Fantasy VII- is empty or needs to be expanded. You can help the Final Fantasy Wiki by expanding it. 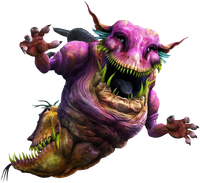 Typhon appears alongside Ultros as a downloadable opponent to be fought in the Coliseum, called by his friend Ultros during the battle against him, in the "Uninvited Invertebrate" mission. Even stronger than Ultros and with more than three million HP, he attacks Serah and Noel mercilessly, supported by Ultros's defensive spells. Upon defeat he can be recruited into the Paradigm Pack as a Commando while having his signature Snort attack as his Feral Link ability.

Typhon appears in the Hildibrand Manderville sidequests for patch 2.4 as a monster kept in Master Fygreis's Coliseum. Due to his allergy to the scent of uncooked truffles, Typhon was used by Ultros to make it seem Avia can use Tempest Blade. Once the deception of Avia's Tempest Blade is exposed, Ultros convinces Dour Meadow to let Typhon and himself fight the adventurer in the Dragon's Neck arena. After losing, Typhon is present at the award ceremony before being forced to sneeze up a strong wind by the thief of many faces that sends Ultros and Gilgamesh flying.

Typhon also appears in Manderville Gold Saucer in the "Any Way the Wind Blows" game, and is available as a mount via the Typhon Horn for 750,000 MGP.

He is described as being a friendly Voidsent who, along with Ultros, was summoned by the Thaumaturge Guild's experiments.

Typhon reappears in the stage "Miss Typhon" in acts 1 and 3 at the Masked Carnivale. Defeating him without defeating Ultros or his tentacles rewards you "Octopath Traveler" achievement.

Typhon makes his entrance to the coliseum.

Big Master Typhon is a fishing lure fashioned after the recurring Typhon enemy from the series. It is obtained from the Totomostro arena, as an allusion to Final Fantasy VI where Typhon appeared at the Coliseum. The lure is good against some of the superfish, notably the Pink Jade Gar, considered the hardest fish to catch.

Typhon appeared as a recruitable character and boss. 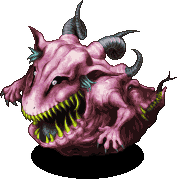 Typhon, along with Pandemona and Phoenix, was considered to be a summon, but was discarded. 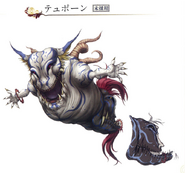 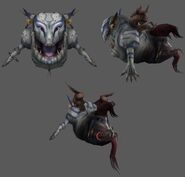 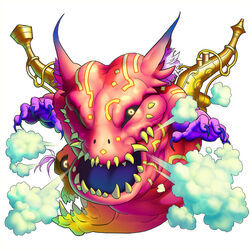 Typhon is a summon obtained as a stage bonus in Destiny Odyssey VII. When summoned, its Final Fantasy VI artwork appears and it uses Snort to blow away a random digit of the opponent's Bravery.

Typhon makes a cameo in the in-game manuals, explaining accessories with Relm and Ultros. He only speaks in cries of "FUNGAH!" and elongations of such, the actual tutorial messages appearing in brackets as subtitles. He also reappears as a summonstone with the same effect as in Dissidia. He can be purchased from certain Moogle Shops for 40 KP.

With frightening faces on both his front and his rear, this forest-dwelling cryptid appears with unsettling laughter. The powerful tornados he lets loose swallow all and turn the very heavens upside down.

Typhon appears as an enemy during Battle Music Sequences.

Typhon appears as an enemy.

Typhon appears as an enemy during an event called "Typhon Appears".

Never one to mince words, this vile, two-faced monster lets its snort do the talking.

Typhon appears as an enemy encountered on the South Figaro Sea. He uses Snort and drops the Zwill Crossblade.

Typhon appears as a boss, usually alongside Orthros. 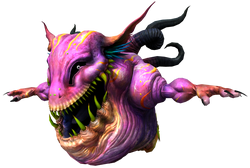 Both Typhon and Ultros appear reusing their models from Final Fantasy XIII-2.

Chupon appears as a character.

Typhon has four cards under his name, and unlike most cards, each is a different element, covering fire, earth, water, and light. 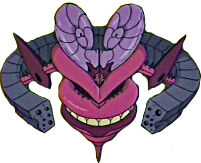 Typhoon is summoned by the Magun attached to Kaze to be used against Fungus, producing a barrier around its target that would crush that figure while imploding.

The Soil Charge Triad needed to summon Typhoon is:

Followed by saying: "Come out! I summon you, Typhoon!"

Typhon appears on a Triple Triad card in the version playable via Final Fantasy Portal App. 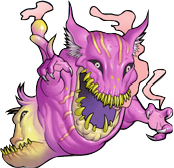 Artwork from the Dawn of Souls version of Final Fantasy.

[view · edit · purge]A typhoon is a mature tropical cyclone that develops in the western part of the North Pacific Ocean between 180° and 100°E. This region is referred to as the Northwestern Pacific Basin, and is the most active tropical cyclone basin on Earth, accounting for almost one-third of the world's annual tropical cyclones.