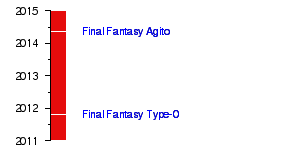 The Type series has been described by Hajime Tabata, the director of Final Fantasy Type-0, as a companion to the main series: it is a means for developers to experiment with gameplay and narratives too new for the main series.[2] According to Tabata, the focus on the Type series would alternate: while Type-0 focused on a teenage and adult audience, Type-1 would focus more on adults, while Type-2 would cater for a younger audience.[3]

After its release the team began development on a sequel for eighth-generation consoles, but it did not go beyond an initial experiment. The work ended up being cancelled when the team was transferred to work on Final Fantasy XV. The work done for the sequel was used as experience for the team while working with the DirectX 11-based engine technology of Final Fantasy XV.[7][8]

[view · edit · purge]The word Type followed by a number is a common way to name a weapon or product in a production series, similar in meaning to "Mark". "Type" was used by the Japanese and Chinese militaries beginning in the 1920s, and is still in use by the Chinese military.