Sabin... Let's settle this with the toss of a coin. Dad gave me this one. If it's heads, you win. Tails, I win. The winner chooses whichever path he wants...no regrets, no hard feelings. Okay?

Edgar presents the coin to Sabin

The two-headed coin is owned by Edgar Roni Figaro in Final Fantasy VI. Bearing Edgar's face on one side and the face of his brother Sabin Rene Figaro on the other, it is used twice in the game to rig plot important events to go in the tosser's favor.

It is called 表裏一体のコイン (hyōri ittai no koin?) in the 25th Memorial Ultimania, translated as "two-headed coin" in the Final Fantasy Ultimania Archive. This term's not used in the game, where Setzer refers to it as a "double-headed coin" (両表のコイン, ryō-hyō no koin?). The OST track related to it is called "Coin of Fate" (運命のコイン, Unmei no Koin?). 表裏一体のコイン can be viewed as the "official name" as it is a piece of armor in Dissidia Final Fantasy Opera Omnia and also appears in Final Fantasy Record Keeper where it's localized as "Fateful Coin".

Ten years ago Edgar and Sabin's father, the ruler of Figaro Castle, perished and his last words were that Figaro be divided between his two sons. Sabin was angry because the rumors that the Gestahlian Empire had poisoned their father were not being investigated and was disgusted by the kingdom's focus on which of the two brothers would succeed the crown instead of the passing of its current wearer.

Sabin, knowing Edgar was also displeased with the state of the kingdom, proposed the two of them flee and live their own lives. Edgar wanted to accept, but knew Sabin coveted freedom more than him and could not bear to see Figaro collapse if both of them were to leave. Thus, Edgar told Sabin they would leave the decision up to a coin toss, using a coin given to Edgar by his father. If it came up heads, Sabin would win, and tails, Edgar would win. The winner would be able to leave or stay if they so chose while the loser would stay and rule Figaro regardless. Sabin accepted and Edgar tossed the coin. When it came up heads, Sabin chose to leave the kingdom and live a free life while Edgar stayed and was appointed king.

After Setzer Gabbiani kidnaps Celes Chere from the Opera House, she sneaks the other party members on-board his airship, the Blackjack. The party seeks to use the Blackjack to fly to the southern continent and infiltrate the Imperial capital Vector, but Setzer is hesitant, particularly when he finds out he has been tricked since he thought Celes was the opera star Maria. Setzer decides Celes is even more beautiful and so agrees to help them if Celes will marry him.

Celes offers to leave the decision to a coin toss―if it's heads, Setzer helps them, if it is tails, Celes will marry him. Setzer accepts, and Celes makes the toss. Setzer notices it has two heads after it comes up in Celes's favor, but he is amused by the low-handed trick and agrees to help anyway. If Edgar is in the party during this sequence, Celes steps aside for a moment and borrows the coin from him, and if Sabin is also in the party, he realizes what Edgar did in the past with it.

Fated Coin is an armor for Edgar that grants 90 CP by default. The artwork features Figaro Castle instead of either of the Figaro brothers.

The coin appears as "Fated Coin". 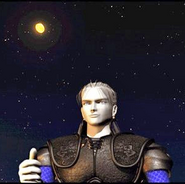 Edgar throwing the coin in an FMV.

The coin's two sides, Edgar and Sabin, in the ending sequence.